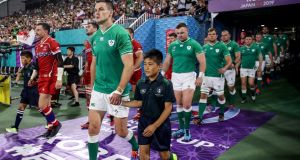 Johnny Sexton has been confirmed as Ireland’s captain for the upcoming six nations. Photograph: Dan Sheridan/Inpho

“We have appointed Johnny as captain for the Six Nations championship,” said Farrell. “You can see what it means to him and the enthusiasm he will bring to the role. He has been developing as a leader for a number of years with Ireland, Leinster and the Lions and he will be a positive voice for the group.”

Munster backrow Jack O’Donoghue – in the form of his life – makes the cut at Ruddock’s expense.

“At the get-together in December we challenged the players to put their hands up for selection and the coaches are really pleased with the performances in recent weeks,” said Farrell.”

“The provinces are doing a great job in developing young talent and we feel there is an opportunity in the national set-up to support that work and get a better insight into some young players that have put in strong performances for their provinces.

“Ryan, Will, Harry and Robert will be the first ones to join the squad in this development role.”

The All Blacks have been doing this for several years.

What’s also clear from Farrell’s selection is the Englishman is only focusing on delivering a successful Six Nations campaign.

Ireland’s preparation for the 2019 World Cup began in December 2015 but plans for the 2023 tournament in France have been shelved until April 2022. This signals a clear lesson from last year’s failure in Japan as too many variables exist to launch another four-year plan.

Sexton is following a similar path to O’Connell in being named Ireland captain in the twilight of his career. O’Connell first led the national team in 2004 but due to Brian O’Driscoll’s largely uninterrupted 10-year reign, spanning 83 Tests, the 2009 British and Irish Lions captain only formally took over the role when named by Joe Schmidt in November 2013. Like Sexton, he was already 34 by that stage.

O’Connell led Ireland to the 2015 World Cup but a severe hamstring injury against France forced him to retire.

Best, who first captained his country in 2009, subsequently led Ireland 38 times up until his retirement last October following defeat to New Zealand in Tokyo. In 2016 Schmidt choose the 33-year-old over Jamie Heaslip.

Best’s replacement at hooker is expected to be Kelleher but if the 21-year-old does not recover from a hand injury Ulster’s Rob Herring or Connacht’s Dave Heffernan will attempt to fill the Ulster man’s boots. Niall Scannell, Best’s deputy in Japan, has been dropped.

Seán Cronin, despite recovering from a neck injury and showing well for Leinster in recent weeks, has not been recalled.

James Ryan is expected to shake off a calf injury before Scotland come to Dublin on February 1st. Despite the 23-year-old’s undeniable leadership abilities, he is the same age as O’Driscoll when he succeeded Keith Wood after the 2003 World Cup, Sexton is the man Farrell wants to guide Ireland this season.

The outhalf remains on course to return from a knee injury, but if he suffers a setback, Ross Byrne is favourite to wear the number 10 jersey in what would be a remarkable turnaround for the 24-year-old, having missed out on World Cup selection to Jack Carty and Joey Carbery.

Neither the Connacht nor Munster outhalf have made the cut; Carty due to a loss of form, which he appears to be addressing, and Carbery due to wrist surgery.

Billy Burns, Ulster’s starting 10, is next in line but this also signals a big opportunity for the highly rated Harry Byrne, younger brother of Ross.

Farrell’s biggest calls will be at scrumhalf – seemingly the call is between Conor Murray and John Cooney, although Luke McGrath remains in the squad – and the backrow.

Leinster duo Doris (21) and Deegan (23), the form players in Ireland in any position, are applying real pressure on O’Mahony, CJ Stander and O’Donoghue for three available slots.

Josh van der Flier looks certain to be retained at openside flanker, unless O’Mahony is switched to number seven.

The Munster captain will be disappointed to be overlooked for the national role but appears his place in the team is no longer secure.

The secondrow also shows a change in the pecking order since 2019 with Devin Toner and Ultan Dillane returning alongside Ryan and Iain Henderson as Jean Kleyn misses out due to a neck injury.