John O'Sullivan: who are the Champions Cup's headline performers so far? 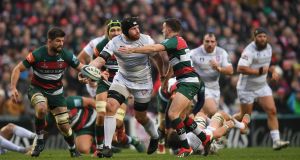 Ben Morgan: Munster will have to restrain the impact of Gloucester’s primary ball carrier at Kingsholm. Photograph: Shaun Botterill/Getty Images

There are some familiar names in terms of the headline performers statistically in this season’s Heineken Champions Cup ahead of the weekend’s round five matches.

The fact that two French clubs, Toulouse, who travel to the RDS to face Leinster, and Racing 92 in Belfast to take on Ulster, lead their respective pools virtually guaranteed that a number of their players would be prominent across several categories.

However in dealing with the Champions Cup matches in sequence from an Irish perspective, the meeting of Gloucester and Munster at Kingsholm on Friday night is dominated to a point by the English club’s injury concerns.

Danny Cipriani – who was sent off in the first match between the clubs at Thomond Park in round two – tore a chest muscle in December but trained yesterday and the Gloucester coach Johan Ackermann was hopeful that the gifted former England outhalf would be available. They’re a completely different attacking entity when he’s present.

Gloucester though have other problems, club captain and scrumhalf Willi Heinz will miss the game, so too Italian international Jake Polledri. As the graphic illustrates, the flanker, an excellent athlete, has beaten more defenders (16) than anyone else on his team and makes the top five overall.

The 22-year-old wing and former England Under-20 World Cup winner, Ollie Thorley is doubtful. He has more metres gained (236) and assists (two) than any Gloucester player in Europe this season while the club’s top try scorer in the current campaign, fullback Jason Woodward (three) has made the most clean breaks (seven) for the Cherry & Whites. He faces a race to be fit having missed the last few weeks.

One player t Munster will have to corral is Gloucester’s England number eight, Ben Morgan, a primary carrier (67) for his team and second in the overall standings but in terms of clubs’ statistics in relation to Europe he leads the way with offloads (five) and tackles (50).

His Munster counterpart CJ Stander (61) is third in the carries category and the Ireland number eight will have a huge part to play at Kingsholm. The absence of the unfortunate Chris Farrell is a setback for Johann van Graan’s team, the significance of which will be revealed on Friday night.

Leinster senior coach Stuart Lancaster made the point during the week that over half of Toulouse’s tries this season come from counterattacking opportunities so it is no surprise that a couple of their backs feature prominently.

South African wing Cheslin Kolbe, who has commandeered many column inches in the build-up to the Leinster game, possesses mesmerising footwork. His ability to travel at the same speed sideways as forwards and stop on a sixpence before changing direction has embarrassed many defenders; 26 (tied second) of whom haven’t managed to stop his progress.

He is one of four players who lead the way in terms of tries scored with four, but he has crossed for another six in the French Top 14 and no one has played more minutes (955, 12 starts) this season for Toulouse.

He too is blessed with beautiful balance, pace and a formidable sidestep, as he demonstrated against Leinster at the Stade Ernest Wallon and will form a potent midfield combination with Romain Ntamack.

Thomas Ramos played fullback against Leinster in Toulouse but is likely to start at outhalf in the RDS and quite apart from his place-kicking prowess he is a difficult player to pin down. He is second in the pecking order in terms of offloads (10) behind teammate Joe Tekori (14) but has played more matches this season, 14 (855 minutes, 10 starts) than any other frontline Toulouse player.

Simon Zebo has been in outstanding form for Racing 92 this season at fullback and wing with seven tries in 12 matches in all competitions but it is the Argentine Juan Imhoff (four), who is tied first in terms of the tournament’s top try scorer, along with Ulster’s Jacob Stockdale amongst others. Stockdale is the only player to score a try in each of the four rounds.

Considering that French international Teddy Thomas is likely to be the third member of Racing’s back three and that outhalf Finn Russell (nine offloads) is arguably his team’s player of the season to date, Ulster’s tackling is going to have to be top notch.

It’s a clumsy segue to the fact that two Ulstermen Iain Henderson (63), sadly absent through injury and Marcell Coetzee (63) make the top five in the tackle category. The only Irish international who features in two categories is Will Addison and Ulster will be hoping that he can improve those figures come Saturday afternoon in what promises to be a cracking Champions Cup weekend.

1 Billy Morton’s Santry Stadium a beacon for sporting endeavour
2 Séamus Power rockets into share of clubhouse lead in Detroit
3 Welcome to Iten in Kenya – home of champions and cheats
4 Red Bull poised to protest over Mercedes’ new steering system
5 Monica Seles: The warrior queen who could have been the best ever
Real news has value SUBSCRIBE