Rugby Statistics: Foreign legion proving their worth where it counts 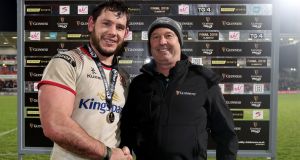 Ulster’s Marcell Coetzee is presented with the man of the match award by Barney McCann after the Pro14 win over Munster. Photograph: Dan Sheridan/Inpho

Whenever the provinces sign ‘foreign’ or to use another term ‘non Irish qualified’ (NIQ) players there is occasionally a period of uncertainty before a definitive judgement is reached.

Personality, age, form, injury, game time, the acclimatisation process on and off the pitch represent a hotchpotch of variables that can directly impact on a player’s facility to settle into a new environment. When Ireland’s frontline players are absent, there is more slack to pick up and a greater focus on the influence of the foreign contingent.

Some adapt brilliantly and with a minimum of fuss. There is a long list of established internationals that have enjoyed a celebrated impact with their adopted provinces; Doug Howlett, Jim Williams, John Langford, Ruan Pienaar, Johann Muller, John Afoa, Felipe Contepomi, Rocky Elsom and Nathan Hines are an example rather than an exhaustive list.

There are others Isa Nacewa – one cap for Fiji – and Connacht’s Ray Ofisa who went on to capture the hearts and minds of the supporters based on their consistent excellence. Leinster’s James Lowe is fast-tracking his way to that status and potentially a green jersey in 2020.

There is obviously a flip side too where foreign players struggle initially or for the duration of their stay, carrying a burden of criticism that would generally not be directed at Irish players.

Ahead of this weekend’s third round of interprovincial matches in the Guinness Pro14, it was interesting to note several high-profile contributions across a variety of statistical categories from both the provinces’ indigenous players, foreign contingent and in the case of Leinster scrumhalf Jamison Gibson-Park, a project player who will be Irish-qualified next summer.

The statistics listed in the graphic are based on the cumulative totals for the opening 12 rounds of matches in the Pro14, highlighting the leading Irish players or those playing in Ireland.

Connacht captain Jarrad Butler has played in 11 Pro14 games so far, racking up 845 minutes and is second overall in tackles made behind Cardiff Blues’ Josh Turnbull.

The 27-year-old New Zealand-born former Brumbies backrow took over the captaincy last summer following John Muldoon’s retirement and he has certainly led by deed as well as word, including 25 tackles in helping the province to a first victory over Ulster in Belfast for 60 years earlier this season.

Butler signed a three-year deal before the residency rules were changed and the former Australian Under-20 international will become Irish qualified in 2020. His provincial team-mate and backrow acolyte Colby Fainga’a has also played in 11 Pro14 matches this season and last weekend produced some very impressive statistics.

The 27-year-old younger brother of twins and Wallabies, Saia and Anthony, featured in the Top 10 across five categories following Connacht’s win over Ulster last weekend that saw them complete a season’s double over their provincial rivals.

Fainga’a led the way in terms of defenders beaten (eight) and offloads (three) and also featured prominently when it came to carries (15), clean breaks (two) and turnovers won (one) in an outstanding individual display from the former Aussie age-grade international.

A third member of Connacht’s ‘foreign’ legion Kyle Godwin ranks fourth in the defenders beaten category (33) in the 11 matches in which the Zimbabwean -born player has played in the Pro14. He’s played 15 out of a possible 16 including Europe.

However there is no disputing the player who has made the biggest impact this season in the Pro14, the 28-times capped Springbok international Marcell Coetzee. Having committed to Ulster in the spring of 2016 he lost the guts of two seasons to a brace of serious knee injuries. This season he’s played 11 Pro14 matches and, as the graphic illustrates, has been superb in a variety of guises in attack and defence.

He is currently following the return to play protocols after failing a HIA during last weekend’s defeat to Connacht in Galway. Henry Speight, whose short term loan period is over and who had returned to Australia, is another player who added value to the Ulster jersey.

A word too for Munster’s Arno Botha and Scott Fardy (Leinster) whose contributions are conspicuous across multiple categories, while it’s easy to understand why Ireland coach Joe Schmidt has been keeping an eye on the progress of Connacht’s Tom Farrell.

A battle of the Farrells, Tom and Chris (Munster) would be an interesting sideshow if it materialises next Saturday in Galway.

In the current climate there is little to quibble about in terms of the provincial recruitment process and the net benefit in rugby terms.