How Bath’s Underhill and Louw gave Leinster the breakdown blues

John O'Sullivan: Protecting the ball at the breakdown will be high on Leinster's agenda 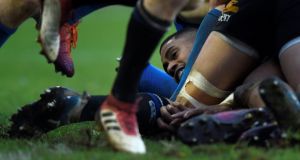 Tadhg Furlong’s observations this week on the key constituents required for the attacking side to retain possession at a breakdown underlined both how infinitesimal the margin for error is, and how seemingly peripheral actions to the main contest for the ball can directly impact on the outcome.

The ball presentation, the speed to support the ball-carrier, the shoulder height and the fight on the ground are important considerations, and also the requirement to “paint the right picture for a referee”, the ultimate arbiter of fact on the pitch.

What is permitted changes slightly from official to official, and that can be occasionally frustrating for players. Yet in general terms they can shave the percentages in their favour with good technique and discipline at rucks.

Leinster were appreciably outplayed at the breakdown in Bath last weekend, and it provided a primary reason why they could not escape Bath’s clutches on the scoreboard.

They conceded seven penalties at rucks, and on another occasion, an eighth turnover, albeit with no penalty, afforded the English club seven points. It was debilitating, but it didn’t cost them victory.

Dealing with Bath’s try first, Dan Leavy was tackled by Bath scrumhalf Will Chudley as he picked from the base of a scrum 7m from the Leinster line. Flanker Sam Underhill, a scourge on the day, along with the equally excellent Francois Louw, got in over the ball, secured a turnover in possession in what proved a short preamble to a try from tighthead Henry Thomas.

Once Leavy failed to get momentum off the back of the scrum, Underhill, on the front foot and just a couple of metres from the tackle area, was perfectly placed to pounce as Leinster couldn’t get numbers to the ruck quickly enough. Chudley’s tackle was the key to the opportunism that ensued to pickpocket Leinster.

It was the home side’s second major turnover, the first coming on six minutes a couple of metres outside the Bath 22 when a combination of Tom Ellis and Louw were the first to react following a couple of handling errors from the visitors. Louw latched onto the ball after Luke McGrath became slightly isolated, and the upshot was a relieving penalty.

Taking an overview of the seven penalties that Leinster conceded at the breakdown, the graphic illustrates that six were in the Bath half and three were within 15m of the home side’s line.

In the 24th minute and again in first-half injury time the Irish province had worked their way deep into the Bath 22. Springbok international Louw rescued his side on both occasions, demonstrating a keen appreciation in identifying the perfect opportunity to poach. He locked on over a prone Ruddock, getting his shoulder in ahead of Cian Healy – he effected two crucial ruck turnovers himself 6m from the Bath line and again with the clock in the red ahead of the interval.

Once again Leinster support players were half a second adrift of the ball carrier, and in fairness to Luke McGrath there was nothing he could do as the first player to arrive in trying to shift Louw. Leo Cullen’s side are normally so ruthless when it comes to exploiting opportunities in the opposition 22, but this wasn’t the case in the first 40 minutes, attributable primarily to their breakdown woes.

Leinster rectified a couple of issues during the half-time chat, one to do with their spacing and speed in defence; several times in going for a double tackle players got in each other’s way, neither managing to get a clean shot on the Bath ball carrier. In addressing this they reduced the number of cheap metres being conceded.

The half-time chat about the breakdown didn’t resolve the issues; if Louw was a thorn in the first half, Underhill assumed the mantle in the second half. Five minutes after the restart he won a penalty 18m from the Bath line. On 50 minutes he forced another, surviving the attempted cleanout by Rhys Ruddock and Healy, and again on 69 minutes when Jonathan Sexton could not budge him.

The Bath flanker’s final intervention, another penalty at a ruck on 77 minutes, was the catalyst for a period of pressure from the home side that led to a penalty, earning them a bonus point.

The weather conditions, a cloying surface and a tight pitch at the Rec were factors, but it’s worth pointing out that the Dublin weather forecast on Saturday evening is for rain.

Cullen may opt to rejig the backrow for the weekend, with Jack Conan starting at No 8, but protecting the ball at the breakdown will have been high on the agenda in training this week; a responsibility shared by the collective.

Underhill and Louw are excellent players, and will get access to ruck ball, but it is Leinster’s ability to curtail their influence that will have a major bearing on the result.