Heineken Champions Cup returns: all you need to know 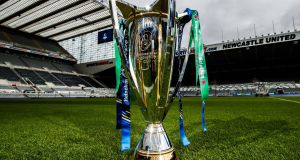 The Heineken Cup trophy at St James’ Park, where the final will be held in May. Photograph: James Crombie/Inpho

The Heineken Champions Cup returns this weekend - the first real act in what promises to be another defining year for Irish rugby.

The three participating provinces head into the fifth round of fixtures with legitimate and realistic hopes of progressing into the knockout stages.

And their continental ambitions will live or die on the final two pool games, which are to be played on back-to-back weekends - a European double header to savour in the bitter depths of January.

The last time there were three Irish representatives in the last-eight of the Heineken Cup came in 2013-14, the second year of Toulon’s three-season dominance.

Stern challenges await over the next fortnight, but defending champions Leinster as well as Munster and Ulster can all put themselves on the verge of qualification with victory this weekend.

Here is all you need to know as the Champions Cup returns.

The great and good of European rugby. Munster get things underway with a trip to play Gloucester at Kingsholm on Friday night, before Leinster meet Toulouse - a meagre eight Champions Cup titles between the two - in an early kick-off on Saturday. Ulster are the third province in action as they welcome the mighty Racing 92 to Ravenhill on Saturday afternoon.

How can I watch?

Want the good news? Saturday’s clash between defending champions Leinster and European aristocrats Toulouse is being broadcast on free-to-air television. That’s right, a bumper meeting between the two most successful sides in the competition’s history - going toe-to-toe for supremacy in Pool One - is available on terrestrial television.

Both Virgin Media One (TV3) and Channel 4 are showing the match at the RDS, which kicks off at 1.0pm. Munster’s trip to Gloucester and the Ulster clash with Racing are being shown on BT Sport, while you can follow all three fixtures through the Irish Times liveblog.

The story so far?

The champions began the defence of their crown in ominous fashion, thrashing Wasps 52-3 in Dublin. The scoreline flattered the English Premiership side. But if that was a warning for the rest of Europe, it wasn’t heeded by Toulouse. A defeat in France to the four-time winners will never truly constitute a shock, but Leinster’s 28-27 loss at the Stade Ernest Wallon was mildly surprising at least. Leo Cullen’s side then steadied the ship with back-to-back wins over Bath - 17-10 at The Rec, 42-15 at the Aviva Stadium - paving the way for a Pool One shootout with the French.

The Exeter Chiefs have yet to transfer their domestic success onto the continent but a trip to a wild Sandy Park presented a daunting opening assignment for Munster, from which they emerged with a highly creditable - and perhaps disappointing - 10-10 draw. Gloucester were then beaten 36-22 at Thomond Park before Johann van Graan’s side beat an insipid Castres side 30-5 in Limerick.

The Top 14 champions exacted their revenge in round four however, grunting and grinding their way to a 13-12 win in France and blowing Pool Two wide open.

After a season to forget last year Ulster’s resurgence under Dan McFarland has been best highlighted on the continent, where they have serious claims of making it out of a pool which - on paper - looked difficult. Leicester Tigers’ woes have been well documented but Ulster put them away comfortably in round one with a 24-10 win in Belfast. An inevitable 44-12 defeat away to Racing 92 followed before they breathed life into their campaign with back-to-back wins over the struggling Scarlets - 25-24 in west Wales and 3-15 at home.

The top team from each of the five pools qualifies for the knockout rounds, along with the three highest-ranked runners-up.

Since the Heineken Cup was rebranded as the Champions Cup in 2014-15, and the tournament was condensed into five pools instead of six, the average minimum points total needed to qualify is 17.5.

The following sides have emerged as eighth seeds over the past four seasons:

What’s the state of play?

Leinster and Toulouse are vying for top honours - the French on 17 points, the champions on 15. The two meet at the RDS on Saturday, with English duo Bath and Wasps both out.

Munster currently lead the most open pool in the tournament by three points from Castres, but all four sides could still qualify for the last eight. Munster travel to Gloucester and Exeter welcome Castres to Sandy Park this weekend. An English double could leave Van Graan’s side in serious trouble, with the Chiefs visiting Limerick in round six.

Saracens sit top with 18 points from four victories and are a shoo-in for qualification. Glasgow Warriors are second on 14 points and a bonus point win at home to Cardiff - who are already out - this weekend would leave them on 19 points and on the verge of a place in the knockouts.

Racing 92 have bullied their way through the opening four rounds, winning all of their games and scoring an average of 32 points in each. They have 19 points while Ulster are second on 14. If the Irish province could salvage at least a bonus point against the French this weekend before beating Leicester at Welford Road in their final fixture, then they should be well set to qualify as a runner-up.

Another difficult puzzle to solve, with Edinburgh currently leading on 15 points and Toulon propping the table up on six. Montpellier are second on 11 points with Newcastle Falcons on eight after improbable victories over both French sides in the opening two rounds of fixtures - including a famous 26-25 win away to Toulon. In short, it’s wide open.

Is everyone at full strength?

Not quite. All three provinces have got their various selection headaches - some more so than others.

Leinster head into their Toulouse clash without winger James Lowe, who is serving the second of a two-match ban for his red card in the recent Pro14 defeat to Munster. His absence allows Cullen to select Jamison Gibson-Park and Scott Fardy as his two overseas players. Crucially, Johnny Sexton’s fitness remains in the balance as he nurses a leg problem, while Devin Toner is also a doubt.

Munster are in relatively rude health after a busy Christmas, with Peter O’Mahony making a successful return to action against Connacht. Chris Farrell is their major absentee after picking up another injury in the win in Galway, while Chris Cloete returns to training this week.

Iain Henderson remains Ulster’s frontline, long-term absentee - he is set to miss the Six Nations with a thumb injury. Jacob Stockdale is expected to be fit while Ireland Sevens flyer Robert Baloucoune returns to the squad after serving a two-match suspension.

The RDS is completely sold out for Saturday’s visit of Toulouse. There are tickets available for Ulster versus Racing 92 at Ravenhill, which can be purchased HERE. Gloucester’s Kingsholm Stadium is also sold out for Friday night’s clash with Munster.

And who’s favourite to lift the trophy?

Leinster retain favouritism despite their away defeat to Toulouse - this will surely be strengthened if they exact revenge at home.

France’s Romain Poite will referee Munster’s trip to Gloucester on Friday night. England’s Luke Pearce has the whistle for Leinster versus Toulouse with Matthew Carley (England) in charge for Ulster against Racing 92.