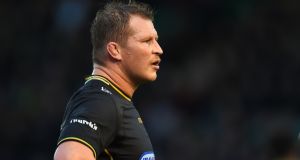 Dylan Hartley has been ruled out for Northampton with a knee injury for the second consecutive week, less than a month before England begin their Six Nations campaign against Ireland.

The England co-captain has been omitted from the 23-man squad to face Wasps on Sunday, having been a late withdrawal before last Friday’s impressive victory over the Premiership leaders, Exeter. After the match the Northampton director of rugby, Chris Boyd, said Hartley’s omission was a precautionary measure, taken because his knee was “grumbling” but he is among the Saints players considered unavailable for selection against Wasps.

Northampton have not put a time-frame on Hartley’s return, only reiterating that “we have to assess it week by week, but we are not going to push it”. His absence on Sunday however, means there will be only one more match to demonstrate his fitness before Eddie Jones names his Six Nations squad on January 17th.

Hartley lost his place in England’s starting XV towards the end of their autumn campaign – Jamie George started against Japan and Australia – though the Northampton hooker remains an integral part of Jones’s squad, having held on to the captaincy in a shared capacity with Owen Farrell.

Jones has also showed a willingness to select Hartley despite question marks over his match fitness before. In early 2017 Hartley was passed fit to start England’s Six Nations campaign against France – his first match in almost two months because of a six-week suspension.

Meanwhile, Henry Slade returns to the Exeter starting lineup as the Chiefs look to get back to winning ways against Bristol on Saturday. Slade was among the replacements last week against Northampton following a shoulder injury but returns to the starting XV alongside Luke Cowan-Dickie, Jonny Hill and Dave Dennis.

The Exeter director of rugby, Rob Baxter, said: “This is the first of three big games coming up for us, so our performance levels, the way we want to play, plus the intensity we need should all come into play for this game. I know it looks to some that we are looking beyond this weekend’s game, but that’s not the case at all.”

Elsewhere, Gloucester welcome back the wing Ollie Thorley – who was rewarded for his recent form with a call to join an England squad gathering this week – for their trip to Leicester but are without Tom Savage, who has been suspended for two weeks. The tighthead prop Nick Schonert is back as Worcester face Bath on Saturday. – Guardian service