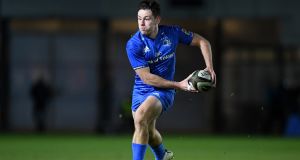 Sevens rugby polarises opinion. Some view it as a standalone bastardisation of the 15-a-side game that does little to develop the skill sets of players who crossover between the two forms of the game. Others reject that assertion, pointing to footwork, lines of running and the ability to defend large swatches of turf as areas that can be improved by playing the abbreviated form of the game.

The sport is littered with marquee names who have managed to move between Sevens and 15s. The IRFU’s decision to belatedly embrace the Sevens game as a pathway to expose young players to international competition has been a resounding success by any yardstick.

Under the direction of Anthony Eddy, appointed in December 2014, the Ireland Women’s Sevens team compete in the elite World Series, while the Men’s team continues to progress towards that level, winning tournaments this season on the European circuit in Moscow and Marcoussis to take the overall honours and also claiming a bronze medal, when finishing third as an invitational side in a World Sevens tournament in London. Last weekend they won the Dubai Invitational Sevens while the Women’s team finished eighth in the elite competition.

The Ireland Women’s and Men’s team also overachieved based on their pre-tournament rankings at last season’s Sevens World Cup in San Francisco, the women finishing sixth with victories over England and Russia and the Men’s team ninth, winning the Challenge Cup that included wins over Australia, Kenya and Wales all of whom compete on the World Series circuit.

There are also practical examples of players who have benefitted within the Irish system in recent seasons, Nick Timoney, Barry Daly, Tom Daly, Rory O’Loughlin, Dan Goggin and Alex Wootton, spending time in the Sevens environment before returning to make an impact with their provinces.

This season there is another tranche of players who have proved that Sevens and 15s are not mutually exclusive development pathways. Cork native Shane Daly has played in six tournaments for the Ireland Sevens teams in 2018, an integral part of their successes during that time, but he also played in four Celtic Cup matches for Munster A and in September made his senior debut when playing on the wing in a Pro14 match against the Cheetahs on the opening weekend of the tournament.

He was singled out for praise afterwards by Munster coach Johann van Graan, a highlight a brilliant covering tackle on Cheetahs fullback Malcolm Jaer, an aspect of his development that he admitted was improved by his time in Sevens. “I find that sevens improves your 15s game and especially in defence.” The 21-year-old made his second senior appearance for Munster, coincidentally against the Cheetahs, this time in South Africa and at outside centre, a more familiar role.

Enniskillen’s Robert Baloucoune (21), who also played in six tournaments for the Ireland Sevens team (2018), was handed an Ulster debut in the province’s Pro14 match against the Dragons at the end of October and has since gone on to the play two further games on the right wing against Benetton and the Scarlets.

Hugo Keenan accumulated two caps for Leinster prior to this season, but had doubled that tally in recent weeks, impressing at fullback in a couple of Pro14 matches, including grabbing a try in the win over the Dragons. The 22-year-old from Mount Merrion has played 10 official tournaments for Ireland Sevens, six this year, since making his debut last season.

Former Newbridge College and Irish underage and Sevens international Jimmy O’Brien (22), like Keenan contributed handsomely to Leinster A’s victory in the inaugural Celtic Cup, and after making his full Leinster debut as a replacement in the Pro14 win over the Ospreys, he started at outside centre, scoring two tries against the Dragons.

Daly, Keenan and O’Brien were all members of the Ireland squad that reached the 2016 Under-20 World Junior Championship Final before losing to England in Manchester, so they had an obvious pedigree in the 15-a-side game. All however have acknowledged that their time in the Sevens set-up has broadened their skill base and given them valuable pitch time which would not have been as prevalent if they had remained at their provinces, waiting for opportunities in the 15-a-sie.

Crossing between Sevens and 15s has honed their skills as players; for example, O’Brien ostensibly an outhalf or inside centre wore the number 13 jersey for Leinster and was comfortable mentally and physically. Daly, a centre, has played wing, Keenan, a wing, at fullback. Sevens won’t suit every player and there are ‘lifers’ who have and will flourish exclusively in the abbreviated game – the IRFU is due to announce their first ever professional contracts specifically for Sevens players shortly – but as a mechanism for development it certainly isn’t a cul-de-sac for those capable of playing both codes.