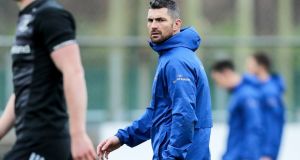 Rob Kearney returns from injury to captain Leinster in Saturday evening’s Pro14 clash with Ulster at the RDS.

Leo Cullen has made a number of changes from the side beaten 26-17 by Munster, with a crunch Champions Cup clash with Toulouse looming next weekend.

One enforced change sees the suspended James Lowe make way for Barry Daly, with Adam Byrne starting on the right wing in a new-look back three.

Conor O’Brien comes in at outside centre to partner Noel Reid, with Ciarán Frawley handed the number 10 jersey ahead of Ross Byrne. Jamison Gibson-Park starts at nine.

Up front Jack McGrath, Sean Cronin and Andrew Porter form a powerful frontrow, with Ross Molony and Mick Kearney in the engineroom.

Meanwhile Dan McFarland has also made a number of changes to his 23 for the Saturday tea-time clash in Dublin, again with one eye on next weekend’s European commitments.

Rob Lyttle has returned from a long-term injury to start on the right wing, and he’s joined in the back three by academy players Michael Lowry and Angus Kernohan.

James Hume - another academy player - starts in midfield alongside Darren Cave, with Dave Shanahan and Johnny McPhillips in the halfbacks.

Kyle McCall, hooker Adam McBurney and Wiehahn Herbst form the frontrow with captain Alan O’Connor partnering Matthew Dalton at lock. Greg Jones will make his first start of the season in the backrow alongside Sean Reidy and Nick Timoney.

1 Séamus Power rockets into share of clubhouse lead in Detroit
2 What became of Celtic’s Lisbon Lions?
3 Monica Seles: The warrior queen who could have been the best ever
4 Red Bull poised to protest over Mercedes’ new steering system
5 Billy Morton’s Santry Stadium a beacon for sporting endeavour
Real news has value SUBSCRIBE