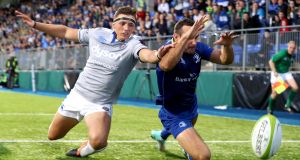 Leinster’s Dave Kearney scores a try despite the efforts of and Darren Atkins of Bath during the pre-season friendly at Donnybrook Stadium. Photograph: Bryan Keane/Inpho

The introduction of Joey Carbery gave Leinster the impetus they needed to resist Bath’s comeback in a pre-season hit out at Donnybrook on Friday night.

The utility back, operating at outhalf. showed an array of skills in front of watching Ireland coach Joe Schmidt one week before the start of the Pro 14 League.

There was more than a touch of early season cobwebs about the first quarter as turnovers and mistakes reigned supreme.

Leinster moved ahead from outhalf Ross Byrne’s counter measure from deep and Jamison Gibson-Park’s teasing passes to draw a penalty at the ruck which Byrne slotted in the 25th minute.

The impressive distribution of Gibson-Park and eye-catching impact of loosehead Ed Byrne, flanker Will Connors and centre Conor O’Brien were important in setting up Leinster’s first try.

Number eight Max Deegan has a nose for the whitewash and he followed Connors’s low body angle in bursting over to make it 8-0 just on half-time.

The lead was soon extended from Carbery’s chip through and Dave Kearney’s speed into the ball for Carbery’s conversion to make it 15-0 in the 42nd minute.

Leinster looked to lift the pace of the game from there as Carbery’s footwork started to create havoc and his penalty on the hour was a reward for pressure.

They showed patience in moving into a strike zone and hammering away until scrumhalf Nick McCarthy sniped for the decisive try three minutes from the end.

For Ulster, who begin their Pro 14 campaign next week at home to the Toyota Cheetahs, it proved to be a highly forgettable evening and saw them lose their second pre-season friendly to Premiership opposition after last week’s home defeat to Wasps.

The Saints scorched the Irish province in the second half by racking up 43 points to ruin former Connacht player John Cooney’s debut for his new team after joining Ulster in the wake of Ruan Pienaar’s controversial departure.

Cooney did get on the scoresheet though with one penalty early in the second half while Charles Piutau and Dave Shanahan crossed for the visitors’ tries in a deeply disappointing effort which saw Callum Black and Chris Henry binned in either half.

The Saints led 12-5 at half-time after early tries from Ben Foden and Kieran Brookes but after Cooney’s second-half penalty made it 12-8 they turned on the power.

1 Saracens’ emphatic opening salvo enough to keep Leinster at bay
2 Next stop the Champs-Elysées in green for Sam Bennett
3 Saracens deliver the brutal blueprint on how to beat Leinster
4 Matthew Wolff leads US Open but Rory McIlroy is among the chasing pack
5 Born to ride, born to win: Sam Bennett, the making of a green machine
Real news has value SUBSCRIBE