Tom Tierney: Ireland 'got out of jail' against Japan 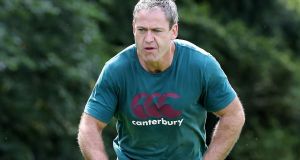 Head coach Tom Tierney: “We just need to make sure we play the game of our lives against the French.” Photograph: Dan Sheridan/Inpho

Risky business this coaching lark. Especially at a World Cup where 28-women squads are expected to win five matches in 17 days.

The player welfare element is highly questionable but it also stacks the advantage in favour of England.

“The sheer fact that we have got great strength in depth with our squad makes it a lot easier for us,” said the world champions coach Simon Middleton after the Red Roses 56-13 victory over Italy saw their entire bench rolled on as the tries (10 in total) kept coming.

Tom Tierney does not exist with such luxury. Almost all the changes enforced upon the Ireland coach for this at times awful display failed.

But the suspicion is that Tierney had little choice but to put Maz Reilly – Ireland’s set piece general and at 6ft 3in the tallest player in the tournament – and Jenny Murphy on ice for this 24-12 win over Japan.

It seems unthinkable not to start Ailis Egan or Paula Fitzpatrick. And so it proved as the game took a dramatic swing in Ireland’s favour when these veteran forwards entered the fray.

“Five match tournament with four days in between matches you have got to rotate,” said Tierney.

“You have to use everybody because some bodies won’t be able to handle five games. Some will, but some won’t.”

So Reilly and Murphy are fit to play 80 minutes against France on Thursday?

Is it possible to get Ireland’s best team on the field for three matches in nine days?

The Tierney plan was to survive match day one and two. This is all Ireland have managed to achieve.

“We got through them nonetheless and now we go all out for the third game which is a cup final.

“We win a match against France and we are into a semi-final. Do that and the hassles and worries and relief from these first two games will be forgotten about.

“We can’t feel sorry for ourselves, and we won’t,” Tierney continued, clearly accepting the fact his Ireland side have failed to perform until the hour mark against Australia and now Japan – until the fear of elimination took root in the collective mindset.

It shows a team with deep -rooted courage but, equally, this Ireland team continue to struggle with the basics of rugby.

This is nothing new in Irish national team sports, nothing new to those who tracked the men’s rugby team from Bordeaux to Paris in 2007.

The French are coming and they backed up the thrashing of Japan with a comprehensive dismissal of Australia last night.

Despite being a side Ireland have beaten in the past at home, including last February in Donnybrook, they now look like genuine contenders to England and New Zealand.

Ireland look anything but potential champions.

“The French are going to be excellent. They have shown that when they are allowed play they are a huge challenge.

“We are going to be massive underdogs, we are not going to be expected to win by anyone, not by yourselves or anyone else outside the camp. That’s fine.”

But that has long been the case with a side who climbed, unlooked for by the IRFU, from complete obscurity to do the Grand Slam in 2013.

They maintained these ridiculous standards, in 2014, when beating the same Black Ferns side that are destroying all comers over in Davy Billings Park.

What is different now from back then is the number of unforced errors.

The knock-ons seem guaranteed every two or three phases.

It seems a mental rather than skill deficiency – perhaps brought on by the pressure of playing in front of the home supporters.

“I suppose it is because the girls are well able to do it,” Tierney conceded. “They have done it before in matches and in training.

“It’s just about refocusing the minds. We got out of jail tonight.

“Without a shadow of a doubt. We just need to make sure we play the game of our lives against the French.”