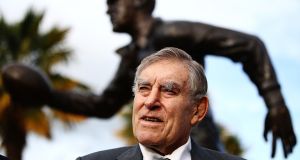 All Blacks great Colin Meads has died from pancreatic cancer at the age of 81, New Zealand Rugby has announced.

Meads played 133 times for the All Blacks between 1957 and 1971, appearing in 55 tests, and the King Country lock earned an international reputation for his fierce play.

He captained the All Blacks in the famous series against the British and Irish Lions in 1971, and was named New Zealand’s player of the century by the NZRFU in 1999.

Meads was diagnosed with pancreatic cancer in August last year, and died on Sunday morning at Te Kuiti Hospital.

“Sir Colin represented what it means to be a New Zealander. He was no-nonsense, reliable, hardworking, warm and very generous with his time,” he said on Twitter.

“A sad day for New Zealand rugby and for New Zealand. Sir Colin was not only a great All Black but also a genuinely good Kiwi bloke. He will be missed.”

3 Marlay Park has designs on golf for all weathers