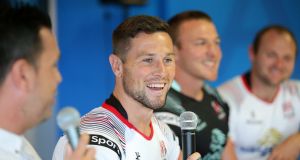 New Ulster scrumhalf John Cooney: “I prefer to come into a place where a big name or player has been before because I like that challenge.” Photograph: Kelvin Boyes/Presseye/Inpho.

So how do you follow Ruan Pienaar? As unenviable prospects go it must be right up there to wear the Ulster number nine shirt vacated after the South African legend, and Kingspan Stadium favourite, was forced to move on.

Yet that scenario appealed to John Cooney as he quit Connacht – where he was second choice to Kieran Marmion – to head north and do battle with the long-serving Paul Marshall to take full ownership of Pienaar’s former jersey.

“It’s a challenge, but I’m here for the challenge,” said the 27-year-old who began his playing career at Leinster.

“It’s obviously a big deal with him leaving but I prefer to come into a place where a big name or player has been before because I like that challenge.”

In fairness it was really a no-brainer for Cooney who, though he collected a Heineken Cup and European Challenge Cup at Leinster, while also picking up Pro12 honours there before doing likewise in Connacht, has never been able to establish himself as a front-line player and was benched for all those finals.

Now, at Ulster, he has that opportunity and is hungry for regular game-time regardless of having to follow quite an act in the now Montpellier-based Pienaar.

“I remember hearing about him [Pienaar] having to leave on the radio,” Cooney recalls of the situation that emerged 12 months ago with the IRFU demanding that, after seven years at Ulster, the World Cup-winning Springbok finally make way for an Irish qualified player.

“And straight away I thought ‘there’s an opportunity there’ because I was out of contract at Connacht. So when I heard that, I texted my agent straightaway. I was hoping they’d [Ulster] get on to me about it and a few weeks later they did.

“From there it was pretty straightforward.”

With Cooney ticking all the boxes, the deal was done. He was then selected for Ireland’s summer tour, where he picked up his first full international cap with a short cameo off the bench in the second Test in Japan, further helping his confidence and determination to make things work at Ulster.

He makes no secret that at this stage of his career – having largely played in the shadow of Marmion in Galway – he wants the chance to play regularly.

“Between me and Kieran (Marmion) we’d sometimes got game-time between us but I want to play in big games and don’t want to be starting one game and subbing the next,” he stated of his three years at Connacht.

“With game-time being limited there (Connacht), that was the main thing really (that brought me to Ulster).”

When he talks of how his pathway was blocked at Leinster and then again at Connacht, this opening, at the third Irish province he will have represented, makes abundant sense.

“Patience is something I’ve had to learn over the years,” he says with a smile.

He also brings to Ulster extra dimensions to his game with goal-kicking and even an outing at 10 for Connacht also bolstering his cause to be a more than useful replacement for Pienaar as Les Kiss’s squad seek to avoid revisiting their deeply disappointing last campaign.

Another new arrival from an Irish province is Springbok Jean Deysel who was with Munster for the tail-end of last season on a short-term deal to cover injuries in Rassie Erasmus’s squad.

The powerful 32-year-old powerful backrower was to return to the Sharks – where Ulster have previously sourced Pienaar, BJ Botha, Johann Muller and current squad members Wiehahn Herbst and Marcell Coetzee – following Munster’s Guinness Pro12 final defeat to the Scarlets but, after Kiss’s signing of Arno Botha fell through, Deysel was offered, and gladly took, a two-year contract.

“When it happened I was really over the moon because I’d always heard good things about Ulster as I know so many friends who have played or are still playing there.

“I spoke to Ruan a lot about it and it really was an easy ‘yes’ when it came up,” Deysel, who impressed at Munster, added.