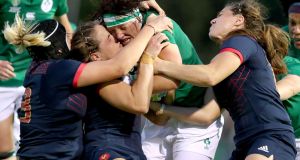 The Fields of Athenry is a beautiful lament. With 25 minutes on the clock it gently rang around Belfield as Ireland threw everything and nothing at the all conquering French.

At 14-0 the game already felt long lost. France did exactly what Ireland coach Tom Tierney expected of them: “If you look at the history of Ireland and France – the women and the men’s game – you have situation where France traditionally always come out to blow you off the park in the first 10, 15 minutes,” said a prescient Tierney the night before. “Then they play champagne rugby. The key is to counteract that. We need to impose our game on them.”

What that game is we do not know. Neither, apparently, do the players.

Pick and go will never be enough.

Ireland came into this World Cup on home soil without a discernible plan. Now comes a long trudge up to Belfast. Playing for fifth.

This was a clean kill by genuine World Cup contenders. Three minutes after The Fields faded the champagne corks were popping as French centre Caroline Ladagnous galloped over for her second try.

A third conversion by gifted fullback Montserrat Amedee made it 21-0.

Here lies Ireland’s World Cup dream but when, it must be asked, was it ever anything more than that?

Claire Molloy leads a pack that can hold sway with all comers. This we know from three-year-old evidence when they toppled then world champions New Zealand. The bones of the 2014 pack that reached a semi-final in Paris took too long to climb into this fight.

Besides the fast tracking of Lindsay Peat from another sporting life, basketball and Gaelic football, alongside the progress of Ciara Griffin and Leah Lyons, these forwards have been at Tierney’s disposal since his appointment as Ireland’s first professional coach in December 2014.

Under the bright new leadership of Niamh Briggs, they won the next Six Nations.

But Sevens was no longer on the horizon. It was the priority. Even on the week of a Six Nations match, as the Las Vegas Three proved, when the women’s director of rugby Anthony Eddy redirected Sene Naoupu, Hannah Tyrrell and Ali Miller (the heartbeat of this team) off to the Nevada desert.

The media piled into the IRFU but not for the sake of it; all the complaining came from inside an uninformed Ireland squad, from the girls themselves.

The message was clear: Eddy, appointed by fellow Australian David Nucifora, is the boss. Which is fine so long as the priority was to ensure Tierney built a squad capable of performing at full potential come August.

In this regard the Irish coaches have emphatically failed in their duty.

Tierney got it badly wrong from the outset. Only the sheer will of his misguided players got them past Australia – a makeshift 15-a-side team, the Wallaroos make no secret of their focus being primarily on Sevens – while the opening 28 minutes against Japan was beyond atrocious.

The masterplan was flawed. The coaches cannot say the players are not good enough. They had the raw materials for success. Ten of last night’s squad overcame the Black Ferns three years ago. They should be entering their prime.

But Tierney tinkered with his squad in search of players to help carry the load. He spent much of last season, all three November internationals – when Ireland lost to England, Canada and New Zealand – and deep into the Six Nations mixing and matching combinations.

The constant changes led to this night, to this collapse. It led to a team with the tightest bonds imaginable – who disgracefully had to soldier together on an overnight train to Pau in 2012, when they lost by a point, and into the sunshine of Marcoussis in 2014 – being unfamiliar with each other.

The essential ingredients have not been evident for two years.

Ladagnous displayed verve and strength to step the heroic Jenny Murphy and make it 12-0 on 13 minutes. Moments before that the sight of their brilliant openside Romane Menager handing off Sophie Spence displayed the gulf in class and power.

But Ireland have long known the need to outfox France, to force them to question themselves and let superior fitness prevail over rugby talent. It never happened. All they depart with is their bravery and a late Cliodhna Moloney try.

Badly coached, the wonder is were Ireland badly handled as well? We cannot possibly know. On Tierney’s watch, access to this special group of Irish rugby players has been airtight.

Not that it matters anymore. Best laid plans are in tatters now. They head north playing for scraps. That is Ireland’s place in the world order. Such is reality.