World Cup qualification on the line as Ireland face Wales

Players need to finish with a strong performance after miserable tournament 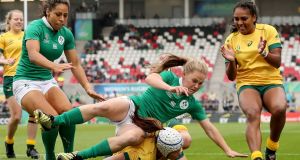 Last of the summer wine. Reasons to be cheerful will follow the news that Claire Molloy and Jenny Murphy were concussed against Australia on Tuesday so they cannot feature in this seventh place playoff that guarantees the winner a place at the 2021 World Cup.

The pair of them walk away from this tournament in the black, heroic and effective in equal measure. The same has been said of the work done by strength and conditioning coach Ed Slattery. Marie-Louise ‘Maz’ Reilly, Ailis Egan and Ali Miller owe nobody an explanation for their outstanding individual displays while in scrumhalf Nicole Cronin a gem was unearthed.

Others excelled yet added to the constant stream of basic errors made in narrow victories over Australia and Japan before comprehensive defeats to France and the Wallaroos (part two).

For some players this will be there last time in a green jersey. That should draw an expressive performance from the collective.

Wales have struggled to stay with Ireland in recent seasons but they’ve made genuine strides during pool defeats to New Zealand and Canada (15-0).

There will not be much time for Ireland to linger on the Ravenhill grass as the great news stories of this tournament, France and the USA, do battle at 5pm in the third place playoff.

Then, at 7.45pm, the main event promises a Test match of the highest calibre as world champions England face the deadly Black Ferns.

New Zealand, despite the Red Roses going undefeated since beating them 29-21 in Rotorua last June, skipped past them in the World Rugby rankings last week.

This is too close to call. England put in a monumental defensive shift to see off the thrilling French just four days ago – the gap between matches has been a major issue at this tournament – as Emily Scarratt found her place-kicking groove but containing Portia Woodman’s flying Kiwis seems next to impossible.

The semi-finals were not brilliant women’s rugby but brilliant rugby.

More of the same is expected in the decider between two nations miles clear of the rest.