Leinster in tough pool for next season’s Heineken Cup 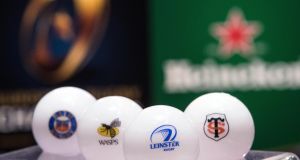 Pool 1 after the draw for next year’s Heineken Cup in Lausanne, Switzerland. Photograph: Morgan Treacy/Inpho

So much for the elevated status of Leinster as this year’s European champions and one of the protected top seeds for next season’s Heineken Cup.

Coach Leo Cullen and his side face former winners Wasps, Toulouse and Bath following Wednesday’s draw in Switzerland. Together the four teams have won the competition 11 times, more than all of the teams in all of the other pools combined.

With four wins for Leinster and Toulouse, who last won the trophy in 2010, two for Wasps and one for Bath in 1997-98, Pool One seems anything like an easy run for the Irish side.

Still, champions Leinster have been installed as tournament favourites at 9-4, with Munster, who share Pool 2 with French Top 14 champions Castres and Premierships sides Exeter and Gloucester, priced at 14-1.

It was Gloucester who suffered a 33-6 defeat against Munster in Limerick in what is now known as the miracle match in 2003. The Irish side needed a four-try victory by a minimum margin of 27 points to reach the quarter-finals at Gloucester’s expense and they did it.

The visit of Parisian side Racing 92’ to Ulster will also bring lock Donnacha Ryan and Simon Zebo back to Ireland for the first time since the pair left Munster.

Zebo, who announced he was leaving the province in January and Ryan who departed in May of last year, will face Ulster, Leicester, who most recently won the trophy 16 years ago, and 2017 Pro 14 league winners Scarlets in Pool 4 of the competition.

Ulster will be a side to watch for a number of reasons, not least of all their end-of-season playoff with Ospreys just to qualify for next season’s competition and also the arrival of new coach and former Connacht player Dan McFarland. McFarland will replace the departing Jono Gibbes on a three-year contract.

The first rounds of the Heineken Cup and European Challenge Cup will be run over October 12th/13th/14th, and although the club fixtures for that weekend have not yet been made it leaves open the possibility for Zebo and Ryan to play in Belfast on the first weekend.

Leinster will also have to contend with the rugby intelligence former backs coach Girvan Dempsey brings to Bath. The former Leinster and Ireland fullback announced he was leaving Leinster at the end of this season.

Capped 82 times, Dempsey took up a role as Leinster’s Academy manager, with a number of the current generation of Leinster stars coming through under his watchful eye. He was appointed backs coach in 2015, and has as much knowledge of Leinster rugby as anyone, including Cullen.

“We made a presentation to Girvan [Dempsey] at the end of the season so we knew we were destined to draw against Bath,” said Cullen. “Anyone that has been part of the team here, when they move somewhere else you always wish them the very best but you hope they don’t come back to haunt you.

“Bath have a very strong coaching group. I was lucky enough to spend some time with Todd Blackadder when he was coaching the Canterbury Crusaders. They’re a really good bunch of people over there, so it will be a great challenge for us.”

Wasp have made some strong signings during the summer, England loose forward Brad Shields and Lima Sopoaga in particular. Sopoaga, a 26-year-old outhalf, has played 16 times for the All Blacks, while former Leinster outhalf Jimmy Gopperth is still playing.