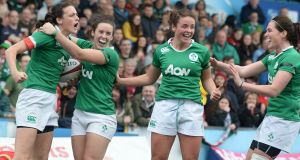 Ireland remain on course for a second Grand Slam in four years. The Six Nations decider against a powerful England, who hammered Scotland 64-0 on Saturday, side takes place at Donnybrook next Friday at 8pm.

This victory required admirable focus to outlast an emotion-fuelled Wales performance in the wake of Elli Norkett’s tragic passing.

There were few positives in the opening 40 minutes. What’s clear is many of the players are still learning the nuances and basics of a fledgling sport. Skill defects consistently ended attacks on either side – be that dropping passes or supporting runners going off their feet at rucks.

It must be hugely frustrating when established internationals like Sophie Spence, Jenny Murphy or Claire Molloy make a line break. only to see the attack falter a phase or two later. But Ireland persevered. Sene Naoupu, Ireland most experienced player, having played to a high level in New Zealand in her youth, came in for heavy punishment from Welsh centres Rebecca de Filippo and Kerin Lake. The hospital passing had something to do with it.

But Ireland lived, for the most part, deep in Welsh territory.

On 27 minutes they engineered the first real chance for five points. Nora Stapleton knew the penalty was too far out, so the Ireland outhalf kicked to touch. From the lineout, five metres from the Welsh line, Maz Reilly came off the top for flanker Ciara Griffin to carry. After being held up short, captain Paula Fitzpatrick picked and went.

Enter English referee Claire Hodnett. Penalty Wales as an Irish player went off her feet at the ruck.

But Ireland were, clearly, the dominant side.

By 37 minutes, Hodnett had warned both captains about the constant infringements on the ground. A yellow card or two seemed inevitable.

Stapleton had another sight of goal soon after, but the leaders went to the lineout again. It proved the correct decision as 30-something Lindsay Peat – an accomplished Dublin Gaelic footballer, underage soccer international and Ireland basketball captain – peeled off the maul for the opening score.

Stapleton added the extras to give Ireland a 7-0 half-time lead.

The second stanza sparked to life in the worse possible way when Welsh fullback Caryl Thomas shimmied out of a few tackles to break free. Hannah Tyrrell put her down but Peat’s entry into the ruck was deemed illegal. Hodnett pulled out the yellow card.

From the next scrum Ireland coach Tom Tierney replaced Fitzpatrick, his captain, with prop Ilse van Staden. Wales number eight Shona Powell-Hughes took full advantage when picking off the base and carrying through Irish halfbacks Mary Healy and Staunton.

The TMO deemed it a try and Robyn Wilkins’s conversion levelled matters.

Back came Ireland. Larissa Muldoon brought an increased urgency at scrumhalf, Tyrrell and Murphy began carrying more, while Staunton went down the line at every opportunity.

The lineout maul remains Ireland’s chief route to the line.

A textbook turnover by flanker Sioned Harries repealed the first onslaught but Wales couldn’t find a decent touch. Ireland were also buoyed by the return of Fitzpatrick and Peat.

Soon it was Wales’ turn to suffer the letter of the law as prop Amy Evans was sin-binned for a high shot on Kim Flood.

This kept Ireland in the Welsh 22. Half-breaks by Naoupu then Sophie Spence, before a clever carry by Ciara Cooney, laid the platform for another try. But error, again, intervened. After a clear overlap was created wide on the left, Naoupu flipped the ball to Murphy who gathered only to pass into touch. Ali Miller, who ran in the decisive try in this fixture two years ago, would have to wait for her chance.

But the second Irish try was coming. It just took a while. Fitzpatrick was held on one charge before forcing her way over at the second attempt.

The TMO and officials disagreed.

No matter. Murphy’s carry off the next scrum was held up short but quick ball allowed Staunton put Tyrrell – one of the three players rerouted to Sevens in Las Vegas last week – over wide right.

“Our accuracy was there at times but it also let us down at times,” said Stapleton. “But we kept going to the very end, and fair play to us for keeping the Welsh in their half.”