Billy Vunipola: 'We know the Irish are going to come at us, know it for a fact'

Eddie Jones’s side look unstoppable with their potent mixture of power, pace and skill 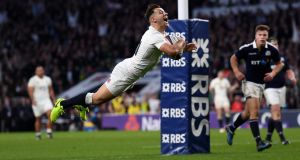 England’s oppressive rugby hymn reverberated around the ancient ground as Scotland desperately sought a manly route away from their try line.

Mathieu Raynal’s whistle shrilled as the giant locks (Itoje wears six but scrums behind the loose head prop) rose for England’s put-in to another scrum.

Itoje mercilessly targeted Barclay, Scotland’s chief spoiler, so much that the Scottish captain moaned to the referee.

The Camden poet laughed. Only 22, he already seems invincible.

A wise commentator made the pre-match recommendation to note Itoje’s behaviour. An athletic freak but, in equal measure, a spawn of Martin Johnson; never missing the chance to strong arm, pat smaller heads or yap in hope of inciting retaliation.

They can’t wait for Dublin.

“The game of rugby is power, pace, skill and if you got a power advantage and use it well it puts you in a good position,” smiled Eddie Jones in his increasingly brief media dealings.

“That’s one of the differential points we’ve got with other teams in the world – we have got a power advantage.”

Stopping them requires a low swing that connects square on the chin.

Otherwise these beasts in human clothing will dominate Ireland like Johnson, Richard Hill and Lawrence Dallaglio did in 2003.

Potentially, there is more in them. The greatest side England ever produced lacked the refreshed sons of Tongan hooker Fe’ao Vunipola.

“We know the Irish are going to come at us, know it for a fact,” said Billy Vunipola.

The irony of that comment should not be lost on anyone. Stopping Vunipola, and big brother Mako, or Fijian convert Nathan Hughes, is the primary means of denying England rapid possession.

“It is more mental than physical because we have never been in this position before,” said Vunipola who, age 24, was born the year Will Carling’s England achieved back-to-back Grand Slams. “It’s the day after St Patrick’s Day so it is going to be very emotional so we have to negate that too.”

Ireland do have the benefit of valuable and recent experience; stopping the All Blacks stretch for 19 games last November and denying England a Grand Slam in 2011.

Then again, Danny Care and Ben Youngs – the relentless scrumhalves duo – along with younger versions of James Haskell, Hartley, Dan Cole and Tom Wood know what it’s like to collect a Six Nations trophy having been humbled in Dublin.

“A few of us have experienced that and it was not a nice feeling,” said Care. “For Ireland stopping us is enough for them . . . In times past they have shocked us with their intensity but hopefully we can take them to a different level.”

What will carry England to a place where no other rugby nation has been before? Power, pace and skill of course.

The speed came via Jonathan Joseph’s slick hat-trick (Jones: “I got to say Scotland didn’t defend well.”) with the sprinter pace of Anthony Watson and Elliot Daly bubbling beneath.

But Jones, knowing brute force always exists in English rugby, has put more work into skills development than any other department. An area Ireland are sorely lacking in comparison. Just see how England filleted France then Wales by turning possession and territory into match-winning tries.

“Teaguey is massively about skills, about testing you under pressure,”

Care explained. “You probably see us playing with different balls and bean bags before the game for hand eye co-ordination. For me specifically we work on picking the right options at the line.”

See the 84th minute. England would not rest. They wanted another record, over Scotland, they wanted to break 60. Care repeatedly launched heavy artillery at the navy line. It seemed just like Ireland in Cardiff until the Harlequins nine fed Mako Vunipola who dummied to the supporting Itoje – who was smashed by the last two Scottish defenders – only for the prop to offload off the floor so Care could swan dive onto the front pages.

“That’s how we want to play the game.”

England’s tactical options appear vast. They terrorise with four gifted halfbacks – three on the field at any one time due to the accidental discovery, after Manu Tuilagi’s body crumbled, of the George Ford-Owen Farrell axis; northern English sons bringing Rugby League grit.

“Owen Farrell and George Ford work tirelessly at their art,” said Jones. “They have a great mentor in Jonny Wilkinson. He comes in every day and works with them, whenever they want; he is a phone call away.”

Greatness, as Jones and his players agree, only comes by overcoming Ireland in Dublin.

This monumental Twickenham showing can be deceptive. Much like the Principality Stadium injects pure adrenaline into Welsh men, gargantuan English forwards are ruthless in their own unique environment.

“Ireland, psychologically, are in a very strong position,” said a smiling Jones. “They are beaten, they are out of the tournament, they love spoiling parties. And the party they love to spoil the most is the England party.”

Dublin has proved a graveyard for English Grand Slams in the past. See Keith Wood running over Neil Back in 2001 or the Sexton-inspired scalping six years ago.

But this lot, “18 months into a four-year project, mate”, demand further satisfaction.

“They have an enormous amount of psychological advantage,” he repeated in case someone missed his message. We won, we are the champions of the Six Nations so we are in the most vulnerable state and we are going to have to work really hard to get ourselves right for the game.

Like the All Blacks, the men in white look unstoppable.