Gerry Thornley: Away wins in Six Nations are like gold dust

If Ireland want to be champions again, they will have to learn how to win on the road 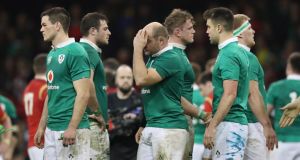 The weekend confirmed what we have always known: away wins are like gold dust in the uber-competitive Six Nations. Consider this: so far in this championship there has only been one away win outside of Rome, and that was only courtesy of Elliot Daly’s 76th minute try for England in Cardiff on the second weekend.

In all the other eight matches there have been eight home wins. It was a similar story last season, when the only away wins outside of Rome were also by England, who won in Murrayfield and then Stade de France on the final Saturday to complete a Grand Slam.

Evidence of how hard away wins are to come by was underlined again over the weekend, when France’s bonus point win in the Stadio Olimpico ended a run of five successive away defeats in the championship dating back to their last visit to Rome in 2015.

Scotland’s defeat at Twickenham wasn’t exactly bucking a trend either, even if the scale of England’s 61-21 victory was bigger than anyone had anticipated. Although the Scots had travelled south with more hope – and justifiable optimism at that – than for some time, it extended their winless run in London which dates back to 1983.

Viewed in that light, Ireland’s 22-9 defeat to Wales in the Principality Stadium was very much part of an overall trend, and one which has maintained Ireland’s increasing difficulties on the road. That record 63-10 win in Rome four weeks ago has been their only away win in the last two Six Nations campaigns.

Ireland’s win over France extended their four-year unbeaten home record in the Six Nations under Joe Schmidt to nine matches (eight wins and a draw), but this inability to win away, save for in Rome, is what has prevented Ireland from being contenders going into the final weekend for the last two years.

Admittedly had Ireland won in Cardiff on Saturday, thanks to England’s bonus-point win over Scotland, Joe Schmidt’s team would have gone into Saturday’s finale at the Aviva Stadium five points behind England and thus requiring a bonus point victory to regain the title they won in 2014 and 2015.

The key to the first of those successes was, of course, the last-day 22-20 win over France in Stade de France. Even then, although Ireland scored three tries to two and played superbly against a fired-up French side, they were clinging on by the end.

Having also lost to Wales on the penultimate weekend in the 2015 championship, Ireland retained the title on points difference thanks to their last-day, 40-10 win over Scotland in Murrayfield.

However, since that day, Ireland have lost four from five away games in the Six Nations, their only win being in Rome. This is also part of a trend which has seen Ireland win two and lose seven of their last nine away matches, having previously won six and lost two of their first eight away games under Schmidt.

By contrast, Ireland’s home record under Schmidt is consistently strong, and in addition to their nine-match unbeaten record at the Aviva, in 20 games there, Ireland have won 15, drawn one and lost just four, while their record in neutral venues is five wins and one defeat.

For Ireland to be contenders in next season’s Six Nations they will have to buck the trend of the last two campaigns, but this will require them to win at least one of their away games against France and England, never mind the tall order of winning in both London and Paris for the first time since 1972.

“It’s mighty frustrating to be in that dressing-room at the minute, not only tonight but for the tournament,” said Iain Henderson late into the night at the Principality Stadium, in what is now becoming a familiar post-match refrain away from home.

“We said after Scotland we needed to take it on a week-by-week basis and obviously this was a huge game for both teams. The other way around, Wales would have been in a horrific place. They fronted up and I thought they were excellent.”

The flip side is that the Welsh players showed how playing at home when offered a shot at redemption can be an inspiration, even when the title is no longer at stake.

“England will be coming looking for trophies, they’ll look for a win and we know that that we’re not going to have a home game and roll over. That’s not going to happen.”