Robbie Henshaw: ‘I put my hand up’ for Wales mistake 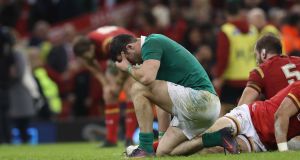 “The Most Physical 30 Seconds of Rugby Ever?” Until England bludgeon a route into Dublin, that honour lives in Cardiff.

An avatar on Youtube sliced a video that begins with a rejuvenated George North bashing past Rob Kearney - who instantly leaps to his feet - before Garry Ringrose hits the winger backwards. Rhys Webb feeds Dan Biggar but the Welsh 10 is emptied by Sean O’Brien.

The game is nine minutes old and Wales are only warming up. Next comes a Justin Tipuric missile. Thankfully, for Ireland, the carry is one out from Johnny Sexton so Robbie Henshaw and Donnacha Ryan meet the Welsh flanker.

The Principality stadium groans in delight. Ryan gets up. Biggar grubbers down the left wing for Liam Williams but Kearney, the last defender once again, stalls his charge with another full frontal collision.

This was a microcosm of the game so to finger Henshaw for defeat, after he naively entered the driving maul in the 69th minute, with Wales leading 15-9, seems unjust. Henshaw’s nicely weighted grubber created the platform in the first place.

“It’s just me not knowing the rules,” said the 23 year old inside centre.

“I thought it was turning so I thought [RORY]was going to break out so I was going to latch on and try get him over. I came in quite fast as well and didn’t have time to readjust.

Joe Schmidt added: “He made an error. He’s a young player who played super in the game. You learn from those experiences.”

But in 2017 a centre hitting a maul remains Ireland’s primary route to the try line when, as Schmidt suggested, “pressure” stopped his team playing with more “freedom.”

“We made it hard for ourselves,” said Henshaw. “We spurned a lot of opportunities...If one of them went our way it could have been a different outcome.”

Belief in the system remains unbowed then, but are the Irish players combining the the way they want to in attack?

“It’s frustrating because we are trying to get to the width a lot. We did that at certain periods of the first phase. There are opportunities there for us but a few handling errors let us down, particularly in the first half when we got a turnover in defence. If we had of got it wide there were acres of space in the left corner.

“A few little things like that let us down. Just areas we need to clean up. In attack we need to work harder to get into shape, particularly our backs, myself included.

“But to end England’s winning streak is a great motivation for us.”