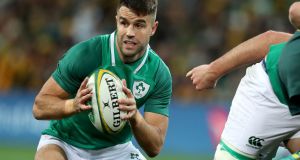 Conor Murray knows full well what it’s like to play in a series decider, and has experienced the whole gamut. He was part of the Lions’ Test series win in 2013, Ireland’s losing series in South Africa and the Lions’ drawn finale last summer.

Needless to say, losing the series with his country two summers ago is the most relevant and the most painful. As well as Murray, Keith Earls, Jack McGrath, Iain Henderson, Devin Toner, CJ Stander, Jordi Murphy and Tadhg Furlong all played in that 19-13 third test defeat in Port Elizabeth.

“For a few lads who are in there now, myself included, we were in South Africa two years ago and it was really frustrating. To go down there and win a series would have been unbelievable, it was a great building process for the team at the time with a few young lads there, but that was the series we let slip. We were definitely in winning positions and, for whatever reasons, we came up short.

“Bodies are fresh, hopefully we get a clean bill of health from the physios and medical staff. It’s the last game of our season and I know we’re really hungry to win a series down here. Whatever about the history, 1979, this is our team, our standards and that is what we want to get.”

Toner admitted that losing the series from being 1-0 up two summers ago had already been mentioned in the AAMI Park dressing room after last Saturday’s second Test win when “we let it slip.”

“So it’s just about getting the bodies right, getting the preparation right this week and obviously going hell for leather next week, because a lot of the lads were on that South Africa tour and they know what it’s like. It lingers with you for the whole summer. You’re on your holidays and you’re thinking about it to be honest. A lot of the lads will remember that and that will be in the back of our heads.”

Several of the heroes from the 2-0 series win in 1979 were amongst those in attendance at a farewell barbecue for the Irish squad at the Australian ambassador’s residence in Dublin, including Ollie Campbell, IRFU president Phil Orr (who is over here), Terry Kennedy and John Moloney.

Saturday’s Sydney shootout affords this group a chance to emulate those players, albeit this is a squad in the now and looking to do things for themselves.

“Yeah, that’s a thing that is there and people are aware of it, but on the other side this team’s mentality is different,” added Murray. “We came down here and we were really annoyed last week at our performance. We could have snuck a win, but our performance wasn’t good enough. They’re the standards we’re used to.

“This week, we had a look at the game and the areas we can improve on and did that. Coming into a game like this, I knew we were going to be in a better place, that we were going to play better. People were kind of annoyed last week because we didn’t show the real us. Tonight we did.

“It just felt more like us. I know we won, but just the performance - we were just more on it in that game, with a really good week’s prep’ and we turned it into a really good performance. We’re hungry for a series.”

Murray hates losing and lives for winning almost as much as Johnny Sexton, and he was still buzzing from a win which offers the chance of a serious, benchmark for this squad. He also had another two try-scoring assists.

“He was just roaring so loudly I felt I had to get it to him, you don’t want to annoy Tadhg Furlong when he wants the ball!

“I don’t really remember, we might have had advantage at the time – there were a few long phases of play. We got deep into their ‘22 a couple of times and we will look to be a bit more clinical next week, hopefully, but thankfully we put away a couple of our opportunities.

“Andrew’s try at the start as well, they don’t give you that many opportunities inside their 22, so when you get in there you have to be effective. I thought we were for the majority of it, it’s just the mentality of our team. We’ve a few areas where we can take more chances.”

The last game of a summer tour and a season has been a bridge too far for Irish teams in the past, which is not so distant for Murray not to have experienced the Hamilton horror show in 2012, but those days are surely gone.

“Yeah, I feel like that, definitely. Years ago that was the case with the 60-0 in Hamilton, that was my first summer tour. That’s out the window, for whatever reason the mindset is different, players don’t start relaxing. We’re a really professional group, we’ll recover and prepare and look to turn up on Saturday in Sydney with a game-plan to win.”

Besides, as he cheerily agreed, this tour is only half the length of a Lions tour.

“Exactly, yeah, and it’s flown. We’ve had fun while we’ve been down here, it’s a really good group to be involved with. Everyone gets on so well. The weeks fly, in between the games it flies, there’s no question of fellas being tired or not fresh, it’s an exciting place to be. It’s half the length of a Lions tour, people just get down to work and want to put their best foot forward. There’s a good buzz around.”