World number one ranking still on horizon for Ireland in Cardiff 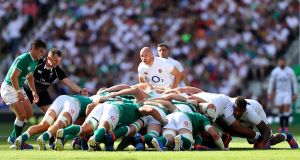 Ireland can still take the number one spot in the World Rugby rankings despite their record 57-15 defeat to England at Twickenham last weekend. Photograph: Photograph: Warren Little/Getty Images

Ireland could still jump to number one in the World Rugby rankings with a victory over Wales on Saturday despite the shellacking they received at the hands of England at Twickenham last weekend.

The record 57-15 defeat to England saw Joe Schmidt’s side drop a place to fourth in the rankings with Eddie Jones’s team moving ahead of them into third.

Ireland would need to beat Wales by 15 points or more in Cardiff to take the top ranking off Warren Gatland’s side and end their two-week reign in top spot.

If Wales draw or lose by less than 15 points, New Zealand will go back to top spot and Ireland will jump to second and Wales drop to fourth.

If Ireland lose by more than 15 points they will drop to fifth place, with South Africa moving up to fourth.