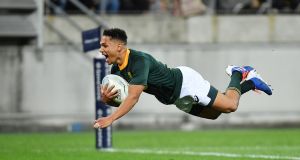 Herschel Jantjies scores his match-saving try for the Springboks against the All Blacks. Photograph: Mark Tantrum/Getty

Not too long ago, South African rugby was in the doldrums. The once mighty Springboks were beaten by Italy at the end of 2016, before suffering pretty dismal defeats to the All Blacks (57-0) and Ireland (38-3) during a difficult 2017 campaign. However cometh the hour, cometh the man. Rassie Erasmus left Munster to take up the role of South Africa’s deputy of rugby in December 2017, before succeeding Allister Coetzee as head coach in March 2018. Since the Springboks have hardly looked back, earning a number of eye-catching results with a squad full of an exciting new generation.

Perhaps the first sign the Boks were back came last September as they beat the All Blacks 36-34 in a Rugby Championship thriller in Wellington. Their resurgence continued into this year’s victorious Rugby Championship campaign, with a 35-17 win over the Wallabies followed by a 16-16 draw with New Zealand - again away in Wellington - and a 46-13 win in Argentina. The Springboks will bring their usual uncompromising physicality to the table in Japan, which is complemented by some thrilling backs such as Cheslin Kolbe and with Handre Pollard pulling the strongs at 10. Add some experience to the mix - Willie Le Roux, Eben Etzebeth and the returning Francois Steyn - and the Springboks look to be in a very good place.

Munster’s loss has proven to be South Africa’s gain, with Rassie Erasmus currently doing a very good job of returning his native country to the top of world rugby’s table. He has found a nice blend of youth and experience, promoting South Africa’s racial quota system and improving the strength-in-depth all the time. This Rugby World Cup is a staging post for Erasmus’s Springboks project but even so they are in a position to seriously challenge in Japan.

Siya Kolisi missed the opening rounds of the Rugby Championship with a knee injury sustained towards the end of the Stormers’ Super Rugby season, but has returned to fitness in time for Japabn. The inspirational 28-year-old became the Springboks’ first ever black captain in 126 years in 2018, and is the talismanic figurehead of the Springboks’ new breed. In his absence the looming Eben Etzebeth had been taking the armband. Still only 27-years-old, he already has 78 caps to his name since making his debut against England in 2012. Not a bad back-up.

Hershel Jantjies thrilling emergence in the Rugby Championship is a real coup for the Springboks heading to Japan. The 23-year-old scrumhalf scored a brace of tries on his debut against Australia before producing another to save the game against the All Blacks next time out. A sniping, waspish presence at the base he also runs excellent support lines. He is not a certainty to start ahead of Faf de Klerk in Japan but is an exciting and dangerous option for Erasmus to have.

The Springboks have won the tournament twice but their victory on home soil in 1995 is the greatest. Nelson Mandela handing the Webb Ellis Cup to Francois Pienaar, after South Africa’s 15-12 victory over the All Blacks at Ellis Park, is one of rugby - and sport’s - most enduring images.

The opening clash with the All Blacks is huge - win it and they will be seen as serious challengers. Defeat would likely mean a last-eight meeting with Ireland, a fixture which is too close to call and won’t be for the feint-hearted.