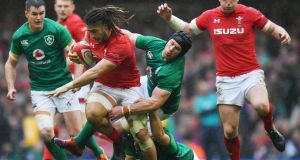 Head coach Warren Gatland has made 14 changes from the starting line-up on duty against England 12 days ago, with Blues back-row forward Josh Navidi captaining Wales for the first time.

Lane and Carre apart, there are also opportunities for the likes of full-back Hallam Amos, centre Scott Williams, fly-half Jarrod Evans and hooker Ryan Elias prior to Gatland announcing his 31-man World Cup squad on Sunday.

Lane and Amos could effectively be battling it out for one back-three place, while 21-year-old Carre has an opportunity to show the form that drove Premiership and European champions Saracens to sign him from the Blues earlier this year.

Saturday’s Principality Stadium encounter will be Gatland’s final Test as Wales boss in Cardiff before he steps down after the World Cup.

“It is a great opportunity for Rhys and Owen,” Gatland said.

“They have worked hard all summer to get to this point, so it will be good for them to get their first international caps and put their hands up for RWC selection after the match.”

Gatland continued: “For Josh, it’s a huge honour to be named captain. He has been hugely consistent for us, he has really impressed in the last couple of seasons and he will lead from the front on Saturday.

“Saturday is a really big game for the players, and I am really excited about the challenge for this Welsh team.

“There is so much at stake in terms of RWC selection and — with a number of positions still up for grabs — it will be a huge game.”

Victory over Ireland would give Wales a 12th-successive home win. They have not lost in Cardiff since November 2017.