Ireland head coach Joe Schmidt has defended his captain Rory Best after the Ulster hooker was criticised for his performance in Ireland's 57-15 defeat to England in Twickenham. Video: John Cassidy 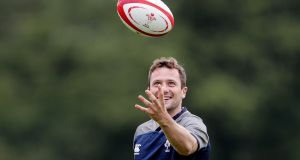 Ireland’s Jack Carty is one of the players jostling for a spot on the plane to Japan. Photo: Laszlo Geczo/Inpho

Considering Ireland coach Joe Schmidt must submit a 31-man squad to World Rugby on Monday the players not selected to face Wales on Saturday appear in real trouble.

Despite the unavailability of Joey Carbery and Johnny Sexton, Leinster’s Ross Byrne does not make the 23-man squad with Schmidt showing his thought process by naming Garry Ringrose as cover behind Connacht’s Jack Carty.

“Garry played a bit of outhalf as a schoolboy [for Blackrock]. He has the temperament and skill base to allow him to fill in there.”

Will Addison, named at fullback here following six months rehab from back surgery, offers multiple options to Ireland when they travel through Japan next month.

“It’s his first run out for a long time so for Will it is a really important opportunity, but he has to hit the ground running. He has trained really well this week.

“The fact he plays centre and on the wing and is a very capable kicker and goal kicker, Will is that Jack of all trades that we may all need. But he is a master of a few as well. We would love to see him put his best foot forward on Saturday.”

If Addison performs, Chris Farrell at centre and Andrew Conway on the right wing are jostling for one remaining slot.

Jack McGrath now seems to be depending on Cian Healy’s ankle injury being more serious than is being reported. The Lions loosehead from 2017 is overlooked this weekend – having featured against Italy and England – as Schmidt continues to use Andrew Porter as cover behind Munster’s Dave Kilcoyne.

Peter O’Mahony will lead Ireland against Wales in Cardiff on Saturday despite the inclusion of Rory Best in the matchday squad.

With Munster’s Niall Scannell starting at hooker, Best is due to win his 119th cap off the bench in this penultimate warm-up match before the World Cup.

Kieran Marmion is the scrumhalf, with Luke McGrath in reserve, despite Conor Murray fully passing his three Head Injury Assessments since a head collision with England’s Jonny May during last weekend’s record 57-15 defeat to England.

Only two scrumhalves are expected to travel.

“We took our eye off the ball [at Twickenham]. I think we were not quite up for the game and we were heavy legged – I accept the responsibility for that,” said Schmidt. “But sometimes that is a bit of a character test; can you get over that and still deliver because we start the World Cup with a six-day and five-day turnaround so there is chance we will be heavy legged.”

The newly shaped backrow sees O’Mahony move to openside – where he featured on tour of Australia in 2018 – Jack Conan launches his bid to become the starting number eight and Tadhg Beirne gets a long overdue opportunity on the blindside flank.

Bundee Aki, Jacob Stockdale, Henderson, and O’Mahony are the only players retained from what Schmidt described as an “unacceptable” performance in London.

1 College football turns blind eye to Covid-19 by risking players' health
2 In turmoil on and off the pitch: Where did it all go wrong for Barcelona?
3 Limerick’s Shane Dowling forced to retire at 27
4 Rugby impasse continues as no deal reached in fourth round of IRFU salary talks
5 The Best Of Times: Harrington stares down Garcia in epic Claret Jug battle at Carnoustie
Real news has value SUBSCRIBE

Tactical test awaits Dettori and English King from stall one at Epsom 16:09
Six to go forward for Aidan O’Brien in Saturday’s Epsom Derby 15:15
‘Several’ players have withdrawn from snooker World Championship 13:48
Limerick’s Shane Dowling forced to retire at 27 12:43
Martina Navratilova: A leader in her time, and for ours 11:59
Crossword Get access to over 6,000 interactive crosswords