Pool C: Argentina hoping to channel spirit of the Jaguares 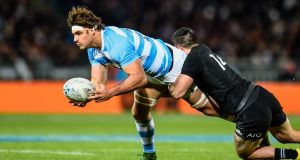 Argentina captain Pablo Matera in action against the All Blacks. Photograph: John Davidson/Inpho

Argentina’s thrilling journey to the semi-finals was one of the stories of the 2015 Rugby World Cup, and they have legitimate hopes of matching that return in Japan this autumn. If the Argentina football team are a group of stars over-reliant on one individual then their rugby counterparts are the polar opposite - a side filled with talent but built on a collective ethos. Los Pumas enjoyed a fine Rugby Championship in 2018, beating Australia and South Africa, before pushing Ireland in Dublin later in the year. However, they were unable to build on that this year - losing all three fixtures during a shortened competition.

Still, the consistent rise of Argentinean rugby is perhaps best embodied by their Super Rugby representatives, the Jaguares. Having joined the competition in 2016 and finishing 13th the Buenos Aires side improved to 10th in 2017 and reached the quarter-finals in 2018. This year, they made it to the final, where they were beaten by the Cantebrury Crusaders in Christchurch. The Jaguares will be Argentina’s bulk suppliers in Japan, giving the side a symbiotic understanding not many can match. If Mario Ledesma’s charges can see off France in a mouth-watering opener, they will be a threat to anyone.

After leading Argentina to the semi-finals in 2015 Daniel Hourcade’s tenure began to go stale, leading Los Pumas to poach Jaguares coach Mario Ledesma last summer. A legend of Argentinean rugby, former hooker Ledesma picked up 84 caps for the national side and appeared at four World Cups from 1999-2011, starting in the victories over Ireland in 1999 and 2007. An inspirational figure, Argentina have enjoyed a sharp upturn since his appointment.

Captain of Los Pumas, captain of the Jaguares, and with 58 caps to his name at 26-years-old - Pablo Matera is the beating heart of Argentinean rugby. At six foot four he is an imposing figure in the backrow, and offers a huge physical presence on both sides of the ball. Matera roams around the pitch and has excellent handling skills to go with a sublime offload.

Los Pumas have a host of exciting, running backs, with 22-year-old Bautista Delguy one of the latest to break through into the first team. He made his debut against Wales last summer and soon became an ever-present, starting 11 of Argentina’s 12 Test matches in 2018 and crossing against Ireland in November. A thrilling, fleet-footed winger, Delguy suffered a serious injury in March but has been named in Argentina’s squad for Japan as he nears his international return.

While their win over Ireland in 2015 set up a maiden place in the semi-finals, their victory over France in 2007 is perhaps the most famous. Los Pumas beat the hosts 17-12 in a Stade de France curtain raiser, tearing up the script and bringing the tournament roaring to life.

An opening victory over France can set the tone - a potential quarter-final against Australia, Wales or Fiji would hold no fear for Los Pumas.

1 Nadia Power determined to push on to the next level
2 The Best Of Times: Harrington stares down Garcia in epic Claret Jug battle at Carnoustie
3 Rugby impasse continues as no deal reached in fourth round of IRFU salary talks
4 College football turns blind eye to Covid-19 by risking players' health
5 Coronavirus has turned Viktor Hovland into long drive champion
Real news has value SUBSCRIBE