Pool C: Tonga out to give the big boys a rattle in Japan 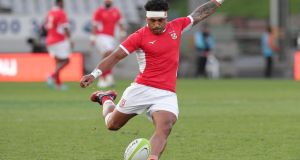 Tonga might not be able to match the All Blacks on the pitch but they can match them off it - for a minute or two at least - with their own fearsome war dance, the Sipi Tau. When the two sides met at the 2003 Rugby World Cup Tonga’s rousing rendition, in direct opposition to the Haka, brought them nose to nose with New Zealand and set fire to the Suncorp Stadium in Brisbane. Granted, Tonga went on to lose 91-7, but that exchange is a perfect example of the fighting spirit they have brought to the Rugby World Cup during their seven appearances since 1987 - they missed out in 1991.

Toutai Kefu’s side are a typical Pacific Islands export - they play fast, loose rugby - with physicality and monster hits the order of the day. Tonga qualified for Japan behind Fiji, pipping Samoa on bonus points following the 2016 and 2017 Pacific Nations Cups. Despite being relative minnows, especially financially, Tonga are currently ranked 15th in the world - having slipped below Italy and Pool Three opponents the USA following the Pacific Nations Cup. Tonga were beaten by Samoa and Japan but earned a victory over Canada. They have caused major upsets before - just ask France - and their physicality and unpredictability means facing them is an uncomfortable proposition for any side.

Tonga’s Toutai Kefu is an Australian legend, after picking up 60 caps for the Wallabies - all from number eight - following his debut in August 1997. He scored a hat-trick against Romania in Belfast in the pool stages of the 1999 Rugby World Cup, as well as starting the semi-final win over South Africa and the final victory over France. Kefu took over as Tonga’s head coach in May 2016 and helped steer them to a place in Japan, as well as masterminding a 27-19 win over Fiji in Lautoka last June - Tonga’s first win in Fiji since 2011.

An uncompromising centre, Siale Piutau is the elder brother of former Ulster star Charles (by six years). Like his brother, the 33-year-old currently plays for Bristol in the English Premiership, after joining from Wasps in 2016. The Auckland-born midfielder cut his teeth in New Zealand provincial rugby, followed by a stint in Super Rugby with the Chiefs and Highlanders. While he doesn’t have quite the same reputation as his illustrious younger brother, Piatau is a vital cog in this Tonga side - he has 35 caps and was an ever-present at the 2011 and 2015 Rugby World Cups.

After joining the Newcastle Falcons in January 2014, Sonatane Takulua has become a cult figure in England’s north east, most recently being named the club’s players’ player of the season for 2018-19. Takalua is a scrumhalf in the French mould, and as well as having an eye for the line - he scored eight tries for the Falcons last season - he is also accurate off the kicking tee. At 28-years-old he is in his prime and will be key to Tongan hopes in Japan.

There can only really be one - the stunning 19-14 win over eventual finalists France in the 2011 Rugby World Cup. Tonga’s victory in Wellington was not only their greatest, but also ranks as one of the biggest upsets in tournament history.

As ever, Tonga have the opportunity to ruffle a few feathers and leave their marks on the bigger boys. Their clash with the USA is their most winnable fixture, but they will be relishing another crack at France.