Pool C: USA’s Eagles unlikely to spread their wings beyond the groups 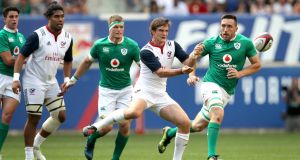 AJ MacGinty in action for the USA against Ireland in 2017. Photograph: Ryan Byrne/Inpho

The USA have been an ever-present at the Rugby World Cup, appearing in every tournament since 1987, but they are yet to progress beyond the pool stages. The prospects of the Eagles finally making it into the knockouts this time round look slim, but it will be interesting to see how competitive Gary Gold’s side are in Japan, with the American game undoubtedly on a consistent - albeit steady - rise. Indeed, this will be the first Rugby World Cup since the inaugural season of the Major League Rugby competition, which began in 2018 and consists of nine franchises - eight from America, and one from Canada.

Qualification was achieved with a two-leg win over Canada - a 28-28 away draw in Hamilton was followed by a 52-16 trouncing in San Diego. The Eagles recently enjoyed a solid Pacific Nations Cup campaign, beating Canada and Samoa but losing to Japan at home. As usual, America’s squad will possess a blend of lightning fast backs and physical, dynamic forwards - while Sale Sharks’ AJ MacGinty, formerly of Connacht, is a steadying and influential presence at outhalf. The USA promise to be fast, loose and fun, and a victory over Tonga is their most realistic goal.

The USA job is the latest chapter in Gary Gold’s storied coaching career, which has included stints in England, Japan and his native South Africa. The former Springboks assistant coach took over the Eagles in 2018 after a spell as director of rugby with the Worcester Warriors, and his tenure got off to a flyer. Indeed, the USA won their first nine Tests under his lead - including a 30-29 win over a Scotland side captained by Stuart Hogg. That run ended with a 57-14 defeat to Ireland in Dublin last November, but America are definitely heading in the right direction under the 52-year-old.

Blaine Scully signed for the Cardiff Blues in the wake of the 2015 Rugby World Cup, with his four years in the Welsh capital coming to an end this summer after he and the club parted ways following the end of the Pro14 season. 31-year-old Scully can play across the back three - although normally on the wing - and at six foot four matches his physicality with tireless work rate. Capped 46 times, this will be his third World Cup, and his role as chairperson of the United States Rugby Players’ Association - which he co-founded - emphasises his importance both on and off the pitch.

The USA have a number of eye-catching players, including powerful 24-year-old Saracens tighthead Titi Lamositele. However, it is impossible to ignore hooker Joe Taufete’e, who has scored a staggering 20 tries in 22 Test appearances - including one against Ireland in Dublin last November and a hat-trick in a defeat to Uruguay in March. The Worcester Warriors forward relishes the physical side of things and is a bruising ball-carrier, with a sharp turn of foot.

Heading into the 2007 tournament Bryan Habana was the fastest man in world rugby, but he saw his crown slip as the Springboks took on the USA in the pool stages. Eagles winger Takudzwa Ngwenya stood up his South Africa counterpart in Montpellier and burnt him on the outside, scoring one of the finest tries in tournament history.

The USA are improving under Gary Gold but it’s hard to see them picking up a result beyond a victory over Tonga.