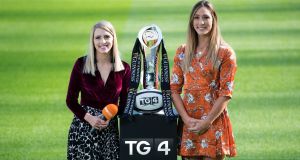 Máire Treasa Ní Dhubhghaill and Eimear Considine will be part of TG4’s all-female analysis and commentary team on Rugbaí Beo for Leinster’s home game against Cardiff at the RDS on Sunday. Photograph: Billy Stickland/Inpho

Three Irish teams remain a cut above the rest so far in the Guinness Pro14 campaign with reigning champions Leinster, Ulster and Munster all yet to experience defeat. Leinster, who meet Cardiff at the RDS on Sunday (5.15pm), are on the verge of another record, the Irish province just one bonus-point win away from matching the Championship best of seven.

The match analysis on TG4, as part of their ongoing commitment to the 20×20 campaign and increasing female participation in sport, will feature an all-female analysis and commentary team on Rugbaí Beo.

Women have featured strongly in the broadcaster’s revamped coverage over the past two years. But this will be the first time in Irish broadcasting that a rugby game will be fully voiced and analysed by a female panel.

“Sunday’s coverage will be a realisation of the pledge we made in March 2019 to develop female commentary talent and another step on the road to addressing the lack of visibility and cultural perceptions of women in sport,” said Rónán Ó Coisdealbha, TG4 head of sport.

There’s a strong chance of the four watching another home win. Leinster have won their last 14 league meetings with the Welsh side since last losing 11-3 in February 2011.

Ulster meet Scarlets in Belfast on Sunday (7.35pm) with both teams on winning streaks and Ulster chasing their seventh successive win, which they haven’t done since 2012. Scarlets have recovered from a sluggish start and have lost just once in four games to Edinburgh. The home side will like their chances in a tough match.

Connacht are also up against Zebre on Sunday (2.30pm) in Stadio Sergio Lanfranchi. Ulster put 57 points on the Italian side, who have won just once this season against Ospreys at home. Connacht won 6-5 in their last visit to Parma but they’ll be hoping for better than that.

Munster travel to Glasgow for the late Monday game (8.15pm) on the plastic pitch at Scotstoun. The sides have not met each other for two years but the last five meetings have all been won by the home side. But unbeaten Munster make the trip having won their opening five fixtures.