Eddie Jones seeks to put the pressure on Ireland 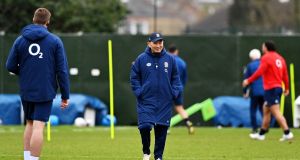 Eddie Jones at England training ahead of the meeting with Ireland at Twickenham. Photo: Justin Tallis - Pool/Getty Images

England coach Eddie Jones would make an excellent sub editor. The spiky Australian understands the media better than most people who work in the industry. Jones knows how to create a false narrative with a funny or insulting remark. He knows how to deliver a headline that primarily serves the purpose of his team.

Sometimes it backfires. Mostly it has the desired impact on the incoming Test match.

On Thursday, the unflappable 60-year-old launched the England press briefing with a line that was designed to motivate his reunited World Cup final backrow of Billy Vunipola, Sam Underhill and Tom Curry.

“We need an aggressive, low to the ground backrow and Sam Underhill and Tom Curry are outstanding in that area.”

Underhill and Curry utterly outplayed an Ireland backrow of CJ Stander, Peter O’Mahony and Josh van der Flier last February in Twickenham. Caelan Doris showed well off the bench but, by then, the 24-12 result was not in doubt.

Just like Ireland’s last trip to London, Ben Earl, the Saracens poacher on loan to Bristol, will arrive for a late tussle, this time with Will Connors.

“I know Andy Farrell very well, they will be well prepared and they will come to Twickenham with a point to prove, which always makes them dangerous.

“So, it is the most important game of the year for us and I am sure they are treating it exactly the same way.”

Why is it the most important game of the year, Eddie?

“Because it is the next game.”

So, really, it isn’t. Most of what he says is to plant a seed in the public consciousness. There were plenty of choice words during the afternoon’s writers’ briefing. Plenty of areas that Jones seeks to manipulate to England’s advantage by putting individuals under pressure. All very Trumpian.