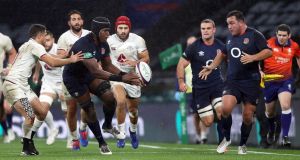 Jamie George became the first England hooker to score a hat-trick of tries as Georgia were pounded into submission in a 40-0 Autumn Nations Cup mismatch at Twickenham.

George was the beneficiary as the home pack struck repeatedly through their lineout drive, reverting to the tactic time and again as their disappointing attack never left first gear.

The highlight of a dour, scrum-heavy clash was Jonathan Joseph’s searing break that led to a 38th-minute try for Elliot Daly, but the moment was also touched by misfortune as the Bath threequarter sustained an injury and had to be helped off.

It ended a successful start to Joseph’s life as an outside centre-turned-wing given licence to roam Twickenham and Eddie Jones must wait to see when he can repeat the experiment.

From start to finish, the afternoon was a grim slog for Georgia as the sport’s 12th-ranked side fought hard to limit opportunities while barely ever troubling the home 22 themselves.

Aided by the arrival of heavy rain, they turned the third quarter into an arm-wrestle to stem the flow of points and stop the game turning into a training ground run out for England, who were wearing their navy change kit.

Jack Willis became the first England player to score on his debut since Billy Vunipola in 2013 after crossing in the 15th minute and the Wasps flanker was clearly comfortable at this level, although tougher tests than Georgia await.

Jones will trumpet a job done as he looks to add more silverware to the Six Nations title won a fortnight ago, but his team’s six-try procession was often ordinary and pedestrian even allowing for the tenacity of opponents who fought to the end.

Georgia have only one victory over a tier one nation in 31 attempts and that record never looked like being improved from the moment they came under sustained early pressure.

Only determined defending kept their try line intact as they repelled a succession of short-range assaults from the set piece.

Joseph was already making an impact but up-front was England’s focus as they pounded away and in the process forced a series of penalties.

It was not easy on the eye, but Georgia were being squeezed at the scrum and with their energy spent they cracked in the 15th minute when Willis showed strength to force his way over, with a little help from Wasps team-mate Joe Launchbury.

Georgia celebrated wildly as they won a scrum penalty to partially avenge the earlier battering they had taken near the posts, but generally the one way traffic continued.

Frustratingly, despite the reams of possession England’s attack was aimless and the second try once again came from the set-piece as a line-out was driven over the line finished by George.

And it was a carbon copy when number three was engineered in the 34th minute, the pack driving forward on an unstoppable march until George touched down.

England eventually injected pace into an attack, Joseph accelerating through a gap, drew the full-back and delivered the scoring pass to Daly, only to then be helped off.

Jones sought to inject fresh impetus by sending on replacements such as Mako Vunipola, Kyle Sinckler and Ben Earl, but with the changes came Georgia’s most promising spell.

Once that was subdued, however, England responded with a third line-out try for George as they once again reverted to their greatest strength. Dan Robson dummied and slipped over to complete the rout.