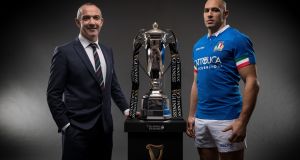 Italy are currently on a run of 17 Six Nations games without a victory - their last coming against Scotland at Murrayfield in 2015. If they are to end their drought in this campaign then the 2019 tournament would be considered a success, but it is hard to see anything other than another wooden spoon for the Azzurri. Conor O’Shea’s 31-man training squad contains 18 players from Benetton Treviso, with the club side vying for third place in their Pro14 Conference B. They have secured a number of eye-catching results this season, including a home victory over Glasgow Warriors, and O’Shea will be hoping to tap into this during the Six Nations. The absence of the diminutive, electric fullback Matteo Minozzi with ruptured knee ligaments is a major blow, with Gloucester flanker Jake Polledri also a big miss. Perhaps the biggest issue for Italy is that while they make steady improvement under O’Shea other sides are also getting better. A clash with Scotland, for example, is not the same wooden spoon shootout it used to be. It promises to be a long campaign for Italy - but they could potentially end it on a high note when France visit in the final round of fixtures.

Since he took over in 2016 O’Shea has overseen just six victories from 28. None of these have come in the Six Nations, with a 20-18 win over the Springboks in November 2016 O’Shea’s only scalp against a top-tier nation. However, while his record is far from glowing, the former Ireland international’s tenure (rumours on the continent suggest he could be replaced after the tournament by Racing 92’s Laurent Travers and Laurent Labit) should be judged on more than just results alone. With a number of Azzurri stalwarts - the likes of Sergio Parisse and Leonardo Ghiraldini - nearing the end, O’Shea has set about blooding the next generation of Italian talent. The 22-year-old Zebre prop Giosuè Zilocchi and 22-year-old Benetton win Luca Sperandio are among those likely to get their chance during the Six Nations - but while O’Shea has one eye on the future, he would surely like to see some results in the present.

Parisse is heading into a staggering 15th Six Nations with Italy, having carried his country for a generation. The 35-year-old is the most-capped (134) and greatest player in Italian rugby history, but while he is yet to reveal any retirement plans this Six Nations could conceivably be his last.

Parisse’s once peerless carrying and all-round ability with the ball in hand have made him arguably Europe’s best number eight of the past 15 years. Admittedly, he is beginning to creak, and there is an argument he is actually holding Italy back. Regardless, we should enjoy him while we still can.

As noted, Minozzi’s serious knee injury is a galling blow for the Azzuri, with the 22-year-old fullback one of the breakthrough players of last year’s Six Nations, scoring four tries in five games. Italy’s attack will be less potent without Minozzi, but his absence can be offset by Benetton winger Luca Sperandio. At 6’ 2” Sperandio - also 22 - is a pacy but powerful runner, able to bounce defenders as well as step them. He scored a fine hat-trick against Edinburgh in the Pro14 earlier this season, and played the full 80 minutes from fullback against Ireland in Chicago last November.

Italy won two of their 11 Test matches in 2018, with those victories coming against Italy and Japan. They were hammered 66-3 by New Zealand in Rome last time out, a week after the All Blacks were beaten by Ireland.

Italy finished bottom with the wooden spoon - a 29-27 defeat to Scotland in Rome the closest they came to victory.