Jacques Brunel hopes France can leave near misses behind them

France coach Jacques Brunel hopes for a quick start to this season's Six Nations championship, lamenting his side's "near misses" in 2018. Video: Reuters 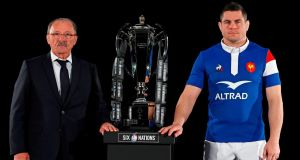 Jacques Brunel has demanded France leave a litany of “near misses” in 2018 behind them.

Head coach Brunel has called on Les Bleus to start edging out the right side of tight contests, and fast.

France will start this year’s Six Nations by hosting Wales in Paris on February 1st, with former Italy boss Brunel aiming to avoid any repeat of last season’s last-gasp loss to Ireland.

Johnny Sexton’s monster drop-goal in the 41st phase of an overtime move stole Ireland a 15-13 win in Paris, flooring Les Blues from the off — and Brunel is determined his men will not keep on suffering that fate.

“The opening match of the 2018 Championship was a game of near misses and we desperately need a win in our first match to restore some confidence after a bruising 2018,” said Brunel.

“This match is important but it will provide a great challenge under the lights.

“In 2018 there were so many near misses, both in the Championship and then on the summer tour to New Zealand.”

A gruelling three-nil summer Test series defeat in New Zealand was then followed up by one-score losses to South Africa and Fiji in the autumn.

“Romain brings enthusiasm, sparkle and he is part of a talented youthful generation who bring spontaneity,” said Brunel.

“We have a lot of young players coming through so it takes time to learn and get that.

“We are very excited for what we can do this year, we are learning all the time.”