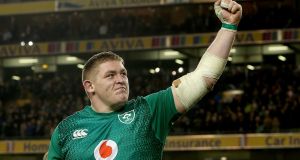 Tadhg Furlong celebrates after Ireland’s victory over the All Blacks. Oisin Keniry/Inpho

Last year was the greatest in Irish rugby history, with a Grand Slam followed by a summer series win in Australia and a maiden victory over the All Blacks on home soil in November. Ireland are the undisputed kings of the northern hemisphere, and short-priced second favourites to dethrone New Zealand at the Rugby World Cup. The defending champions have unparalleled strength-in-depth and possess a number of players who are the best in the world in their position. The fixture list is favourable - both England and France have to travel to Dublin - however a trip to play Wales in Cardiff on the competition’s final weekend is fraught with danger. As ever, if Johnny Sexton can stay fit then Ireland look in very good shape to defend their crown. If they can secure an opening round win at home to England, there could be no looking back.

This will be Joe Schmidt’s sixth and final Six Nations campaign with Ireland before he stands down at the end of the Rugby World Cup and Andy Farrell takes over. The Kiwi will be looking to secure a staggering fourth championship title. Schmidt has created an environment where every single player knows his role and what is expected - coupled with a seemingly endless supply of world class players this has seen Ireland become one of the two best sides on the planet. For Ireland the biggest prize of 2019 would be making it to a maiden World Cup semi-final, and under other regimes this could see focus drift away slightly from the Six Nations. Under the leadership of Schmidt however, this is highly unlikely - he will ensure Ireland are at their ruthless best throughout February and March.

At 36 2019 could well be Rory Best’s swansong and providing his body holds up he will be integral to the side’s plans throughout the year. Ireland’s lineout is the best in the Six Nations, even if the Ulster hooker’s throwing isn’t always what it might be. Best may lack the dynamism around the field of his understudy Sean Cronin, but he remains a formidable operator at the breakdown and will start the Six Nations as Schmidt’s first choice.

Narrowing down one Ireland player to watch is a thankless task given the riches at Joe Schmidt’s disposal, but this Six Nations could belong to the mighty Tadhg Furlong. Furlong is the best tighthead prop in the world, and at 26-years-old he is only likely to get better. His scrummaging is excellent, and there are few finer sights than seeing him scatter defences with one of his trademark rampaging carries. But, there is far more to Furlong than just his physicality - he has hands of velvet, a bottomless engine and the rugby brain of an outhalf. One of Ireland’s truly world class players.

Ireland played 12 Test matches in 2018, winning 11, with the only defeat coming in a 2-1 summer series win away to Australia. With Argentina and the All Blacks beaten last November it’s fair to say Ireland are the form horse heading into the Six Nations.

A Grand Slam victory was emphatically sealed in the snow at Twickenham.