Italy coach Conor O'Shea says that he does not fear for his job ahead of the Six Nations. Video: Reuters 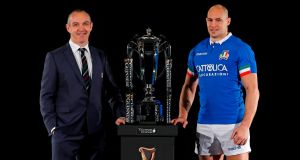 Conor O’Shea has insisted he has no problems if his Italy bosses are assessing alternative coaching options.

The Italian Rugby Federation (FIR) this week issued a staunch backing of boss O’Shea in the wake of rumours touting Racing 92 coaches Laurent Travers and Laurent Labit as replacements.

Italy have lost 10 out of 10 Six Nations matches under O’Shea’s stewardship, but the former Harlequins coach has been tasked with a long-term rebuilding project as much in infrastructure as performance.

O’Shea’s current contract runs until after the 2020 Six Nations and he hinted he could stay beyond that — but vowed to focus solely on this year’s European showdown.

“It’s what you expect, because we’re in this for Italian Rugby,” said O’Shea, of rumours linking others to his job.

“Would I expect them to be looking at alternatives? They say they’re not but I hope they are.

“If they weren’t, they would be slammed for not looking at alternatives.

“In 10 years’ time I want to be having a beer sitting in the stadium with this guy watching an Italy team doing well, (so) that we can say we had a hand in its progress.

“The only concern I have is Scotland. I can’t wait to lead this team to the World Cup and beyond.

“It is not about me, it’s about Italian rugby. The next decision has to be the right thing.”

O’Shea revealed Italy have drafted in highly-regarded former All Blacks coach Wayne Smith as a consultant.

The former Ireland full-back hopes ex-Northampton coach Smith can help Italy hone their approach for the Six Nations and beyond.

Italy will start their campaign by facing Scotland at Murrayfield on February 2, with O’Shea chasing all-round improvement.

“We’ve been very fortunate to work with Wayne Smith on and off in the last year,” said O’Shea.

“He’s worked very closely with back-up staff and helped us to introduce new things to the team.

“He came for the two weeks on the (summer) tour, and he’ll be with us for a couple of weeks in July.

“It’s not very often you sit down with someone and think ‘god I know nothing about rugby’. He’s a great counsel to have, but the big thing is he can articulate because he’s fluent in Italian.

“When he’s over it’s a very easy communication but for us now it’s more behind the scenes.

“It’s a counsel from afar and more a build-up to the World Cup. In a way it’s the same thing but a different voice.

“And people say ‘wow I hadn’t thought of it like that’. Sometimes you need preconceptions to be put away. Some of that’s human nature.

“It’s a multi-faceted challenge. So we beg borrow and steal what we can.”