Joe Schmidt refuses to rule out Lions role in 2021 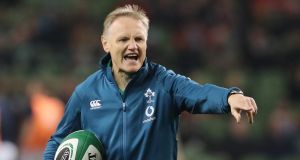 Joe Schmidt has left the door open to a coaching role with the British and Irish Lions in 2021. Photo: Niall Carson/PA Wire

Joe Schmidt has left the door open to a coaching role with the British and Irish Lions in 2021.

Schmidt insisted he intends to take at least a 12-month break after stepping down from his role as Ireland head coach after the autumn’s World Cup.

The 53-year-old Kiwi is set on retiring from coaching after the global contest in Japan, but refused to rule out completely a return to top-level rugby at some point.

Asked if he would like to coach the Lions in 2021, Schmidt replied: “I wouldn’t be available if asked at the moment.

“I said to my wife that we’d get these 12 months done and she said ‘yeah, look, you’ll last 12 days, potentially, without needing to do something’.

“And I wouldn’t say that I’m looking to do any coaching so it’s not something that’s at the forefront of my mind.

“I think one of the things I decided in probably a conversation with myself, for want of a better word, is that whatever does happen after that, I want to make sure these next 10 months are as good as I can help the players be and put as much effort into that.

“And so I think that’s where your energies go.

“I’ve had an incredibly planned life for so many years.

“So I’m kind of looking forward to having 12 months where I can just invest that energy in one direction and also not have a daily itinerary or a weekly plan.”

Highly-decorated Ireland boss Schmidt could be well in the running for a future New Zealand coaching role should he seek another Test job.

Schmidt has guided Ireland from eighth to second in the world rankings in his five-year tenure, overseeing the nation’s first two victories over the back-to-back world champion All Blacks.

Warren Gatland has held informal talks with Lions bosses over a third stint coaching the famed touring side, in the 2021 South Africa trip.

Schmidt meanwhile currently views his immediate future after the World Cup as focused on his family.

Between now and then however, he admitted the privileges and pressures of Test match rugby continue to enthral.

“Sometimes I’m on the bus driving to the ground, on the way to the Aviva you go past this hotel just before you get to the ground,” said Schmidt.

“All these people are really enjoying themselves, and I’m on the bus thinking ‘I just hope it doesn’t go badly’.

“I almost feel like saying to the bus driver, ‘let me off so I can go and have a pint with these people’, and have as much fun as they do.

“But at the same time I’m incredibly privileged to have been as close to a group of men who work as hard as they do.

“It’s been an incredible privilege and I will miss that, I will miss the moments in the changing room seeing the players, and what they put in.”