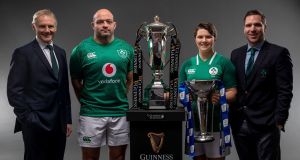 The 2019 Guinness Six Nations will hit the ground running all right. After the Friday night opener between France and Wales in Paris, for the first time since Five became the Six Nations, in other words in two decades, Ireland will meet England on the opening weekend.

“We thought we’d ease our way in,” said Joe Schmidt dryly of the meeting between the favourites and second favourites, before speaking of the dangers in looking anywhere beyond this “mammoth” game, while mindful of the “brutality” Eddie Jones said England will bring to Dublin.

“It will be huge for us, particularly with what’s happened in the last couple of years and even in terms of what Eddie [Jones] said recently, ‘if you want to go to Ireland and get a win you’re going to have to deliver a brutality’. So I think we’re pretty well primed. We need to be primed anyway for what will be a really physical encounter.

“They’ve got the firepower to be physical,” admitted Schmidt, especially with the Vunipolas, Billy and Mako, back in harness, and a potential midfield of Manu Tuilagi and Ben Te’o. Thus, Jones had, according to Schmidt, “signalled that we need to be ready for that”.

The two had good-naturedly crossing paths throughout the morning, Schmidt revealing that in one such passing Jones had quipped he’d “throw another couple of grenades” in Ireland’s direction.

Ironically, the English squad were flying to Vilamoura in the Algarve for over a week’s training yesterday, from where they would fly straight to Dublin, while Schmidt and Rory Best, who strongly intimated that as expected this may be his last Six Nations, were rejoining the rest of the Irish squad 15/20 minutes away in Quinta do Lago.

Last week, Jones admitted to spying on opponents in the past, but stopped doing so a decade ago because it had become a waste of time. Yesterday, he joked about buying a pair of binoculars in the airport, and Schmidt made a couple of droll references to “spying”.

In truth though, Schmidt seemed altogether less bothered by any verbal grenades. “I enjoy the banter with Eddie because he’s that irrepressible character. I respect him as a strategist, he’s a smart coach.”

And a relatively subdued Jones – the only one of the head coaches tieless – was not really of a mind to deliver them.

As for the “brutality” Schmidt referenced, Jones quipped: “Think he might be talking about his own team. I’ve never seen a Six Nations game that was not brutal. Traditionally, if you look at Six Nations history over the years, it’s a big gainline contest. Ball-in-play is higher in the Six Nations than any other tournament in the world. You’ve got to be prepared for it. We’ll be prepared, I’m sure Ireland are not over there in Portugal sunbathing. They’ll be preparing for a tough old contest.”

Ala Schmidt, Jones sought to sell the tournament, noting that all the teams were fitter and better organised compared to his first Grand Slam campaign in 2016.

“You have five teams that can win it – and Italy can cause an upset – which probably wasn’t the case in 2016. That’s fantastic for European rugby, the tournament and the fans. It makes it all that little bit more challenging and more difficult, which is fantastic.

“There’s a sign out there saying it’s the greatest tournament in the world. Four years ago I wouldn’t have said that but having been involved in it there’s nothing like this tournament. The intensity, the contest, how much it means to people, it’s a real honour to be involved in it.”

England had, said Jones, learned from last year’s pain and had changed their back-up staff, the way they train and small elements of their playing philosophy, and although less bullish than in the past, ventured: “I think we’re getting close to having the clarity we need to be the best team in the world. And that’s what we’ve always said we wanted to be. We’re not quite there but we’ll get there.”

True to type, Warren Gatland, enjoying his 12th and last Six Nations launch, has previously stated that if Wales win that opener away to France they’ll win the Six Nations, although yesterday he said Ireland “deserve that pressure” of favouritism.

“There is a lot of talk in Ireland at the moment about them being potential World Cup favourites and going on and winning the tournament. What is going to be challenging for them is it is going to be an interesting quarter-final against South Africa or New Zealand.

“We just concentrate on ourselves and doing the right thing and not worrying about the external stuff which we can’t control. The more you guys talking about other teams the better for us. We just keep trucking on.”

1 Kevin Babington: Learning to live again after life changed forever on Long Island
2 Can Thiago bring the right dynamics to save Liverpool from entropy?
3 Diminished Dele Alli shows the gulf between talent and expectation
4 Matt Williams: The sky is not falling in on Irish rugby - but Ireland do need a new plan
5 Tour de France: Every yellow jersey winner must feel guilty by some association
Real news has value SUBSCRIBE

Diminished Dele Alli shows the gulf between talent and expectation 09:00
Can Thiago bring the right dynamics to save Liverpool from entropy? 09:00
Sam Bennett: ‘A green jersey in the Tour de France is such a highlight of my career’ 07:30
If soul-searching was a sport, today’s GAA teams would all be champions 06:00
Matt Williams: The sky is not falling in on Irish rugby - but Ireland do need a new plan 06:00
Crossword Get access to over 6,000 interactive crosswords