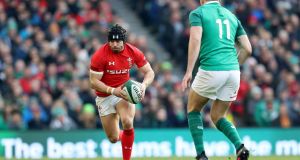 Head coach Warren Gatland has insisted Wales will take no risks with fullback Halfpenny, who is in light training.

Gatland believes his 2019 Wales side boasts more depth than ever, and backed them to cope with any injury concerns.

“For us it’s just easing him back in slowly. We probably won’t consider him for the first two games.

“Then hopefully he starts taking more of a part in training and we can look at potentially including him towards the end of the tournament.

“Luckily enough he has had the distraction of his partner giving birth. And he’s been doing a lot of one-on-one work with Neil Jenkins, kicking — those are good distractions.

“There’s absolutely been no pressure from us in terms of trying to rush him back. The most important thing is his health and his safety.

“We’re just taking advice and moving things along. His well being is the main thing.

“Gareth Davies has a bit of a quad strain and Scott Williams has had an ankle injury the last few weeks.

“I think the squad is incredibly exciting. This squad has probably more depth than we’ve ever had before.

“We’ve made a conscious effort in the last three seasons or since 2015, our focus has been on developing depth and competition.

Ross Moriarty is another Wales star who has been battling concussion, but Gatland is confident the Dragons flanker will be ready for the tournament opener, against France in Paris on February 1st.

“He’s probably someone that — if I’m honest — I wouldn’t be worried about,” said Gatland, of Moriarty.

“The reason I’m saying that, I was surprised in the summer how little rugby he’d had, and he played all three matches.

“I didn’t think he’d be able to get through that but he got better and better as the matches went on.

“He’s a competitor, but it’s about us assessing him this week and seeing where he is. To make sure we do the due diligence on him so that we’re comfortable in terms of that selection.”