Sexton, Henshaw and Earls all set to return for final World Cup warm-up 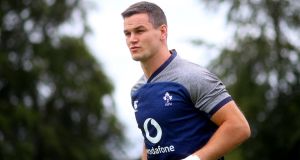 Joe Schmidt and Warren Gatland are likely to be true to their word, and to each other, in unveiling fairly full-strength sides today for Saturday’s final World Cup warm-up match between Ireland and Wales at the Aviva Stadium (kick-off 2pm).

The two coaches had been in contact before these back-to-back games, agreeing to field somewhat experimental sides last week when Ireland emerged 22-17 winners in the Principality Stadium before each reinstated more of their frontliners this Saturday.

So it is that Johnny Sexton, Robbie Henshaw and Keith Earls are all expected to start, so ensuring that all 31 members of Ireland’s World Cup squad have started at least one of the warm-up games.

Schmidt and his coaching ticket see Saturday’s game as the final dress rehearsal for the pivotal World Cup opener against Scotland 15 days later, on September 22nd in Yokohama.

Hence it is likely that Earls will be re-united with Rob Kearney and Jacob Stockdale in the back three, and similarly that Conor Murray will again join Sexton at halfback.

Garry Ringrose having been involved in all three warm-up games to date, and having started the first two at outside centre, it could be that Bundee Aki is re-united with his former Connacht midfield partner in Henshaw at “13”.

Up front, the familiar frontrow of Cian Healy, Rory Best and Tadhg Furlong are also likely to start, as they did in Twickenham, and with Devin Toner not having made the cut, and the James Ryan-Iain Henderson partnership seemingly now first choice, it may be given a second outing in succession.

Last Saturday’s game in Cardiff was only the fifth time that the Ryan-Henderson partnership started a Test together, despite first being paired together in November 2017 for the win over Argentina.

They also started the away wins against France and England which bookended the 2018 Grand Slam and the losing first Test in Australia, while last season their partnership was restricted to the home wins over Argentina and France.

Of course, there have been plenty of other occasions when they’ve finished games together, but considering Ryan has become a mainstay of the squad since the tour to Japan in 2017, he and Henderson haven’t started a huge number of games in harness.

That Schmidt deemed it a “priority” for Jean Kleyn to be afforded his second cap against England a week after he made his debut against Italy suggests back-to-back outings for Ryan and Henderson against Wales may have been part of the plan.

Backrow is interesting and harder to call, not least as Peter O’Mahony has started successive games at blindside and openside, albeit he came off on the hour mark last Saturday. Conceivably he could be used off the bench in the 23, or rested altogether.

Whatever, come the World Cup, there will need to be a fair amount of flexibility among the five chosen backrowers in the squad, and Tadhg Beirne. Hence, it could be that Schmidt and co will have a look at starting the two number “8s”, Jack Conan and CJ Stander, in the same backrow, with the squad’s only out and out openside, Josh van der Flier, returning at “7” after his typically huge work-rate in Twickenham led to him being rested last weekend.

Come a crunch World Cup against big, physical opponents, Schmidt and his assistant coaches may also be of a mind to have Stander and Conan starting in the same backrow.

For his part, Gatland is likely to re-instate the core of the side that beat England in Cardiff a fortnight ago, with George North, Leigh Halfpenny and either Liam Williams or Josh Adams completing the back three.

The Hadleigh Parkes-Jonathan Davies midfield is expected to be reunited, as might be the Gareth Davies-Dan Biggar halfback combination.

Hooker Ken Owens and tighthead Tomas Francis are likely to return to the frontrow, perhaps with Nicky Smith at loosehead.

It will be interesting to see if Alun Wyn Jones is risked, perhaps with Jake Ball recalled given Cory Hill was included in the Welsh squad despite probably not being fit for the start of the World Cup.

Aaron Wainwright, Justin Tipuric and Ross Moriarty could all be reinstated in the backrow.

The auditions for the respective World Cup squads having been completed, the preparations are about to go up a notch.