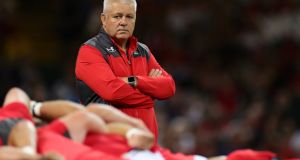 Ireland arrive in Cardiff on Saturday on the back of a record 57-15 defeat to England at Twickenham in which they conceded eight tries.

It was their worst loss under Schmidt and Wales head coach Gatland plans to pile on the misery.

Gatland, who was in charge of Ireland for 38 Tests, suggested Schmidt has plenty of questions to answer looking ahead to Japan and hinted he believes the men in green are too old.

“I was surprised by the Ireland result. They are under an enormous amount of pressure back home with a lot of criticism,” said Gatland.

“They haven’t progressed as far as they would probably have expected in World Cups. There are a lot of doubts in the coaches’ minds about who their best players are.

“Some of their players are getting a bit older – is it a time to put some of the youngsters in? It’s a massive game for Ireland that will answer a lot of questions.

“That’s why I’m excited. It’s a challenge for us. This is professional sport and we can put a massive dent in their confidence and derail them a little bit.”

After sealing Six Nations Grand Slam glory in 2018 Ireland have had a poor 2019 to date and their last visit to Wales saw them thrashed 25-7. It helped Gatland seal his third Welsh Grand Slam.

World number one ranked Wales have made 14 changes for the clash with Ireland from their 13-6 victory over England. It is a last chance for Gatland’s players to impress as he will name his final 31-man World Cup party on Sunday.

Ireland’s players are in the same position after Schmidt made 11 changes to the team which surrendered at Twickenham.

Gatland will hand debuts to prop Rhys Carré and wing Owen Lane with Jarrod Evans making his first start at outhalf. Josh Navidi is captain for the first time.

Evans and playmaker rival Rhys Patchell will play 40 minutes each against Ireland in a bid to seal a spot as back-up to Dan Biggar on the plane to Japan.

“Unfortunately since Gareth Anscombe has been injured the two players [Evans and Patchell] have realised they are really fighting it out. They’ve stepped up and it’s been good,” Gatland said.

“You have to make a sacrifice somewhere in the squad. If we do go with two fly-halves then we know the risk.”

Gatland also hit back at World Rugby vice president Agustin Pichot who said it was “ridiculous” Wales were seen as the best side on the planet despite them topping the official rankings.

The New Zealander will coach Wales for the last time in Cardiff on Saturday and said: “I’m quite happy to decline the position. We didn’t go in and apply for it.