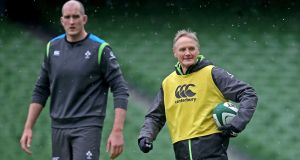 Ireland head coach Joe Schmidt says Devin Toner was very unlucky in missing out on the World Cup and that his ankle injury had affected his pre-season. Photograph: Tommy Dickson/Inpho

Irish coach Joe Schmidt has dismissed as irrelevant the position of World Rugby vice-chairman Gus Pichot, who said that Devin Toner should be asking World Rugby for answers after being dropped from the Irish World Cup squad this week, when residency player, South African-born Jean Kleyn was included.

While measured with his words Schmidt was scathing of the former Argentinean scrumhalf, who has long been a critic of the residency laws and who said Irish lock Toner has a right to be angry with World Rugby.

Kleyn, the latest of a string of ‘project players’ to be capped having been recruited by the IRFU made his Irish debut against Italy last month.

“Gus Pichot had a big opinion about who should be world number one as well,” said Schmidt.

“I think he has a number of big opinions. But they’re not ones that are relevant for us and, talking to Gats [Warren Gatland] last week, they weren’t relevant to him either.

“What is relevant is that under the laws of the game, as they were, we are entitled to pick guys who have qualified. Considering he [Pichot] is involved in World Rugby, he could have a look at what the rules were and not have so many things to say, because for us it is tough enough to do our job and tough enough for me to have a conversation as I did with Dev.”

Schmidt added that the qualification percentage of residency players on the Irish squad is very low and that the rest of the players are homegrown. Defending the inclusion of both CJ Stander, who is South African born and Bundee Aki, a New Zealander of Samoan descent, Schmidt explained that both players had immersed themselves in their localities in Munster and Connacht.

“With Ireland the qualification involvement is I don’t know probably six or seven per cent. The rest are homegrown guys who are not only home grown but who are domiciled here, apart from two years when Johnny [Sexton] was used from Paris,” said the Irish coach.

“I’m not sure I’m the most qualified to comment as I am a blow-in myself and I’ll be blowing out soon enough. So Gus Pichot has changed the rules and those rules will apply beyond this World Cup and they will apply as long as people feel that is the right residency rule.

Schmidt added that he felt under pressure when Aki was selected. A significant rump of a divided Irish media was critical of the selection of Aki in the centre, arguing that the homegrown players should not have been overlooked.

“I was put under a lot of pressure when Bundee played his first game,” said Schmidt. “A lot of people wrote things. But by the end of that first season he had played for Ireland he was named as supporters’ player of the year. Now, I think that the majority – and maybe it is a silent majority – will fully get behind this squad and be fully supportive in the hope that we can do as well as we can in Japan.”

Toner, who had been a regular face in the starting Irish team until this year, was playing catch-up with the rest of the squad Schmidt explained. Still the decision to pick Kleyn was a narrow one that could have fallen either way.

“I think right at the start of the pre-season we said that everyone was vulnerable,” explained the Irish coach. “But we were delighted to have the squad of 45 that we did. We felt we had a good squad and they worked hard. Dev, he was a little bit behind the eight ball. He had that ankle injury so physically he was playing a little bit of catch-up and it just meant that guys just got a little bit of a head start on him.

“But it was a very narrow decision, a very tough call. I’ve known him well for 10 years and I have a huge amount of time for him, not just as a player but as a person. He is real quality so you don’t make those decisions lightly.”