Joe Schmidt urges his Ireland players to retain their belief

Ireland head coach Joe Schmidt has defended his captain Rory Best after the Ulster hooker was criticised for his performance in Ireland's 57-15 defeat to England in Twickenham. Video: John Cassidy 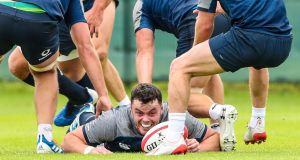 James Ryan during an Ireland squad session at Carton House. The Leinster man returns to the Ireland starting XV for the visit to Wales. Photograph: Billy Stickland/Inpho

Another warm-up friendly and another World Cup trial, the last before Joe Schmidt and his assistant coaches finalise their 31-man squad for Japan on Sunday, if not confirming it publicly until Sunday week.

But, despite another somewhat experimental selection, it is also clear Ireland are treating this as a proper Test match and an opportunity to restore confidence after last week’s filleting by England.

“I think the worst thing for us to do would be to be conservative or to take a step backwards because we’re hesitant or we’re not utterly confident in what we’re doing or the people either side of us.”

Although there are some well established combinations in an all-Munster front-row and a Connacht 9-10-12 axis of Kieran Marmion, Jack Carty and Bundee Aki, there is a degree of fine-tuning other combinations for the World Cup as well as finalising the squad.

The Irish head coach said: “There’s a little bit of a difficulty with that because Will [Addison] hasn’t started at fullback for us for a year, and we’ve got a few different combinations. But we need to accelerate some of the combinations because that’s kind of part of the formula.

“At this stage it’s really about how can we best maximise our opportunities to get some combinations together so that, no matter what happens in the World Cup, we can balance up and have different guys slot in and be comfortable enough that they know each other well enough that we don’t get guys kind of playing within slightly different systems.”

Dave Kilcoyne, James Ryan, Jack Conan and Addison all make their seasonal reappearances, meaning that only Johnny Sexton, Robbie Henshaw and Keith Earls of the 41-man squad have yet to play, and Schmidt expressed confidence that this trio are “all highly likely to play next week” against Wales at the Aviva Stadium.

As for this game, Addison, Andrew Conway, Chris Farrell, Carty and that Munster front-row will all feel the need to perform, but all look to have a huge carrot to play for too.

Addison’s selection is intriguing. He hasn’t played a game since Ulster’s 14-13 win away to Leicester on January 19th in the Heineken Champions Cup due to a back injury which required an operation. This was compounded by a slight muscle injury which cost him a week’s training. Yet here he is, still standing, the least inexperienced player in the 41-man squad.

That he is now starting at fullback suggests the 27-year-old is still very much under consideration. His previous three caps have come in three different positions, and in addition to fullback, wing and centre, he can play outhalf at a push and can provide an alternative first receiver. Schmidt even referenced Addison’s kicking game and goal-kicking.

The back row of Tadhg Beirne, Peter O’Mahony, at openside, and Conan has been partially the result of Rhys Ruddock having an unspecified “niggle”, as well as the “massive workloads” of Josh van der Flier (20 tackles) especially and CJ Stander (18 tackles). Van der Flier “covered more metres than anyone else and had more involvements than anyone else” according to Schmidt.

The Ireland head coach expressed the hope that Beirne and O’Mahony “will get some good pressure on the ball”. That is Beirne’s forte, and he will want to make a bigger impression in that regard than was the case at the Principality Stadium last March when making his third Test start, all in the second row.

“Jack Conan is well known for his ability to run in space and play in the wide channels really effectively,” said Schmidt, and this looks like an opportunity for Conan to stake a claim for the number ‘8’ jersey as much as a place in the squad.

Similarly it is also a measure of Schmidt’s intent to treat this as a proper match, as opposed to effectively taking the Twickenham detour on the run between Portugal and Dublin last week, that Ross Byrne was not considered after being unable to train until yesterday with a leg injury picked up in Twickenham.

Hence Garry Ringrose has been revisiting his school days by filling in at outhalf this week and will cover there from the bench. This is a match-day squad that have been training together all week and, according to Schmidt, have trained well too.

For all Warren Gatland’s latest salvo of pre-match hand grenades on the eve of his final home match as the Welsh head coach, as expected he too has named an experimental side showing 14 changes from the XV which kicked off the win over England last Saturday week in Cardiff. Gatland will announce his World Cup squad on Sunday.

All of which also points to quite a full-on final warm-up game next Saturday.