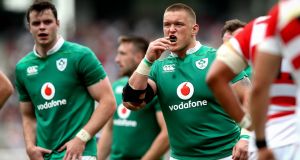 Maintaining his belief that there is a good balance in Ireland’s 31-man World Cup, Joe Schmidt had said changing shifts in the game and the contrast in travel distance between the 2015 and 2019 World Cups were major considerations in its make-up.

Recent evidence has pointed to an increased emphasis on size and physicality, with South Africa winning the Rugby Champions and a resurgent England enjoying big home wins over Wales and Ireland.

Perhaps with the concluding pool matches against Russia and particularly Samoa in mind, the squad features players such as Jean Kleyn, Rhys Ruddock and Chris Farrell.

That said, Schmidt countered: “I think the game can shift in six months, let alone 12 months, so you’re trying to cover as many different ways of playing the game as possible because you want to be able to exert pressure in as many ways as possible.”

He added: “The dynamic power game that some teams have, I don’t think that’s a shift. I mean that was Wales that we always knew. Wales in the last World Cup averaged 106kgs per man and that’s gargantuan by our standards, and they will be big on Saturday as well physically,” said Schmidt in reference to his final home game at the Aviva Stadium, when he expects Johnny Sexton, Robbie Henshaw, Keith Earls and, at a push, Joey Carbery to feature.

“We are used to coping against teams that are physically bigger than we are, but it can be attritional and it can be physically sapping for players. So we want to make sure we can physically compete, no matter what way our opponents play, and at the same time, we can impose a little bit of pressure on them by being able to mix up the way we play.”

Also mindful of fast-paced games on hard pitches in hot and humid conditions, especially against Scotland and Japan, the squad is younger (average age 26.5) than four years ago (28.2), if fractionally more experienced in terms of caps, which Schmidt admitted “wasn’t utterly coincidental”.

“When we went to Japan and New Jersey [in 2017], that was the big investment for us. We wanted to get a few guys away, the Jacob Stockdales, James Ryans, Andrew Porters. We felt that was a pivotal time to springboard two years down the track into a good, strong position.”

Noting the loss of another young, dynamic player from that tour, Dan Leavy, Schmidt added: “There’s going to be other guys who are required to play big but also required to be incredibly fast. Japan play at a rate of knots and they’ve been really impressive. To have led England at half-time, to have beaten a South Africa last time, their resilience is incredibly admirable.”

Asked what he liked about the squad, Schmidt said:

“This time we feel like we have to have really good cover within the squad and I feel our cover is pretty good. Now, you get two injuries in one position and we could be struggling – everyone knows they have got that same vulnerability.”

Noting how other countries have opted for an 18/13 split and that, a la Devin Toner, Steve Hansen had omitted a player he had known his entire career in Owen Franks, Schmidt said: “I think any coach will tell you it is a tough day when you have to have those conversations.”

“For me the guys that we have got, I know that they are going to be utterly committed to trying to get beyond that quarter-final phase. The most frustrating thing about my job is that I can work as hard as I like but I still can’t guarantee you anything other than we will try to put our best foot forward.”

Although the Top 14 season is up and running, Schmidt again clarified why neither a match-fit Simon Zebo nor Donnacha Ryan, or any other player based abroad, could yet be parachuted into the squad.

“No, no, no. I’ve always tried to repeat the same message, that if we accept that in the pinnacle, the biggest tournament, if we do take players from outside of Ireland, then players are going to feel, ‘Well, I can go and play for more money somewhere else’.”

“You say match-fit, but I coached in the Top 14. I don’t think that the Top 14 players are as fit as the Pro14 players. I would believe that the players here are better conditioned; probably because they have to be because we don’t have the same size of squads or the same profile of player.

“I know a few years ago when the EPCR took over the ERC there was a number of articles written where we had to open our doors to more foreign players or otherwise we wouldn’t get out of our pool. Well, last season all four provinces got out of their pools,” he said, also highlighting that Leinster and Munster reached the semi-finals and Leinster the final of the Heineken Champions Cup a year after winning it.

“I think we’ve got to keep supporting the players who are on this island, because that’s when our supporters get to see those players play, that’s when provinces can still stay competitive in Europe.

“Otherwise if we start to dilute that player quality I think it’s a real risk for us,” said Schmidt, given the financial wealth of the French and English club games.

“It’s admirable that players stay here for substantially less money so that they can pull on a green jersey, and when they pull it on, it’s very, very seldom that they don’t give it incredibly good service.”