Return of captain Stuart McInally strengthens side for Argentina encounter 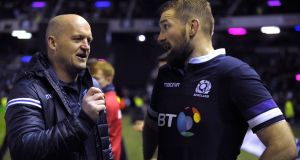 Scotland’s players received a rocket after failing to achieve lift-off in Houston last weekend and their head coach, Gregor Townsend, expects atonement against an Argentina side who have forgotten what victory tastes like.

Townsend has made eight changes for Saturday’s match in Resistencia from the side beaten by the USA, seven at forward. He may have left a number of players at home for a tour that started in Canada but the defeat by a side that had never before beaten a tier-one nation was a considerable setback.

“I have learned a lot on this tour about this group,” Townsend said. “We have exposed more players to Test rugby and we believe that will put us in a much better position in the future. It will help us for the season ahead and beyond.”

The hooker and captain, Stuart McInally, returns from injury while the secondrow Tim Swinson is the only survivor at forward with Townsend expecting Argentina to look to dominate up front.

However, the Pumas have become neither one thing nor the other after sacrificing their traditional 10-man game based on set-piece dominance for a wider approach.

Their series defeat against a largely experimental Wales side last week prompted their head coach, Daniel Hourcade, to announce he would be standing down after the Scotland match. The decision not to consider players who are based abroad means he has only one team from which choose, the Jaguares, limiting competition for places.

Townsend said: “We have to impose our game on them; we have not done enough of that on this tour. We need to keep hold of the ball and put Argentina under pressure because when we do we look really dangerous.

“The breakdown is huge in today’s game and we have to have a greater presence after a tackle.”