Sydney Letter: Ireland provide spotlight for rugby Down Under 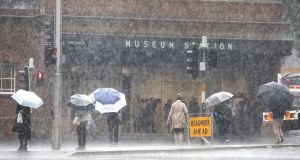 City commuters go about their business despite the heavy rain in Sydney earlier this week. Photograph: EPA

So much for sunny Sydney. Snow on the Blue Mountains about 90km away is always, apparently a sure sign of a cold snap heading here.

Wednesday was reported as Sydney’s coldest day in a decade, and Thursday was its shortest, while Tuesday must have been a contender for its wettest.

What with the roads in the Central Business District near Darling Harbour and Circular Quay being ripped up for new tram lines, akin to Dublin and Edinburgh in recent times but apparently already years behind schedule, it made for an unusually grim first three days in Sydney.

After humid Brisbane to cooler Melbourne it has certainly been different to three weeks being based in the Carton House for the squad. Once the weather relented, there’s also plenty to do. Several Irish players took the ferry to Manly on Wednesday for lunch.

“We went to Hugos and it lived up to the hype,” said James Ryan. “It was actually delicious, but quite choppy on the way back.”

Peter O’Mahony was said to have emerged from the sea in Bondi beach after some surfing to one surprised Irishman who asked him what the water was like. He said: “Just beautiful,” according to his inquisitor.

There’s also plenty of relatives and friends around, notably Irish cousins for the players to catch up with. Ryan was hosted by a cousin on Tuesday night, Paula Sindone, who is married to an Italian.

“Some home-cooked food. It was lovely. And she’s got some kids, so obviously they’re my second cousins. Everybody seems to have cousins here. It’s like: ‘where are you going?’ ‘Off to my cousins.’ It’s hilarious.”

Ryan, like others, was also blown away by the amount of green jerseys and green flags in Melbourne last Saturday and it is expected that the southern stand in Sydney’s Allianz Stadium will also be a sea of green.

Helping to fill up all three Test venues, and taking the series to a decider, the Irish have proved popular tourists. After an eight-year gap since their last visit, apparently we could be back here in two years’ time, and no wonder.

Australian rugby is enduring difficult times, particularly with its unloved Super Rugby franchises, which were reduced from five to four this year when Rugby Australia cut the Western Force adrift.

The outspoken former Wallabies head coach turned radio commentator Alan Jones delivered a withering critique of Rugby Australia in The Australian newspaper yesterday. He opened his critical analysis by pointing to the loss of many gifted young rugby union players to rugby league due to “the hopeless schoolboy rugby system” in Australia.

Jones lacerated Rugby AU for spending only Aus $3.7 million (€2.4 million) of its $150 million (€96 million) income last year on grassroots rugby, compared to $38m on Super Rugby, $17m on corporate salaries, noting that this was a paltry investment of $13 per player even though all club and underage players had to pay Rugby AU $50 to play the game. By comparison, he wrote, the AFL had set aside $253 million for investment in its grassroots and community games this year.

He recommended four steps, replace the current CEO with a new one, ditto the chairman and the board, replace Rod Kafer as head of coaches (not least for suggesting Eddie Jones be brought back into the Wallabies’ fold in the future) and find the money to spend on the grassroots.

This third Test has also come against a continuing battle for air time and print space, with the Socceroos dominating the sports coverage for much of the week in the build-up to their 1-1 draw with Denmark in the World Cup on Thursday night. A 10pm kick-off at night certainly filled up the bars and enlivened downtown Sydney, as thousands acclaimed their equalising penalty and thereafter oohed and ahhed in unison as they repeatedly threatened a winner.

In one bar, gold-clad supporters completely packed out the upstairs bar whereas downstairs some of the Central Business District workforce mingled and kept a closer if less passionate eye on proceedings. But for much of the week, it’s been the only show in town.

Apart from the Socceroos, the main news story this week has been the decision by Woolworths to ban plastic bags from last Wednesday. It has provoked fury on social media (nothing entirely new there) even though it was forewarned, and, in South Australia, a plastic bag ban has been in place for almost a decade and the earth hasn’t stopped spinning.

And, of course, this was the primary reason.

Millions of plastic bags end up in the environment every year and are often ingested by turtles, sea birds and whales. Dr Kathy Townsend, a lecturer of animal ecology at the University of the Sunshine Coast, has been studying the impact of marine debris on turtles for the past decade.

“Plastic bags have been shown to be one of those making the biggest impact as far as sea turtles are concerned,” she said.

She said about 30 per cent of the marine sea turtles she had surveyed died due to ingesting marine debris, with the majority of that waste being plastic bags.

“That’s one third of the animals dying in this area, because of this one thing – we can stop that and that’s a big deal.”

Nor is it just sea turtles that will benefit. Dr Townsend said more than 200 species had been recorded eating marine debris.

Last week’s second Test clashed directly with the Socceroos’ World Cup opener against France, and so the television ratings were down 65 per cent on the first Test to 276,000 across Ten and Fox Sports.

This time, although the State of Origin II on Sunday in Sydney’s 83,500 capacity ANZ Stadium will be the main show in town over the weekend, the third Test will be centre stage.

So this is the Wallabies’ moment in the sun so to speak. And, of course, Ireland’s.

1 Welcome to Iten in Kenya – home of champions and cheats
2 Saracens to accept second 35-point deduction and effective relegation
3 How do Klopp’s Liverpool measure up against greats of past?
4 Sonia O’Sullivan: How did Melbourne become the world’s most polluted city?
5 James Ryan returns to the Leinster fold for Benetton clash
Real news has value SUBSCRIBE