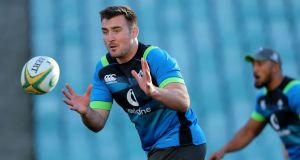 Niall Scannell during the captain’s run at Allianz Stadium, Sydney ahead of the third Test. Photograph: Dan Sheridan/Inpho

Sean Cronin has been cruelly denied the chance to start the third Test series decider against Australia after being ruled out of the game with a grade one tear to his hamstring. As a result, Niall Scannell has been promoted from the bench with Rob Herring called into the match-day squad.

This ought not discommode Ireland too much. Scannell started with Herring on the bench last week and in the enforced absence of Rory Best – whose image adorns the bunting which has decorated all three match venues alongside that of Australian captain Michael Hooper – these two have in many ways been the relative “finds” of the tour to date.

This was to have been only Cronin’s tenth start in 63 Test appearances, his first since the Canadian game in November 2016 as well as his first against a southern hemisphere team since facing South Africa in November 2014. More than anything, it was an opportunity to convince Joe Schmidt and Greg Feek that despite his relative lack of bulk and the costly scrum disintegration in the 68th minute of the first Test, he could help hold up a scrum at this level.

The confidence in an Irish win has ebbed a little due to, ultimately now, a quintet of players all being ruled out. In particular, Dan Leavy’s high volume of work and big plays were a cornerstone of the Grand Slam triumph and went some way to negating the effect of David Pocock and Michael Hooper at the breakdown last week. Garry Ringrose adds more footwork and more of a threat of an outside break in those wide channels.

In their stead, the recall of Jack Conan and Bundee Aki, in tandem with CJ Stander and Robbie Henshaw, certainly gives this Irish team plenty of hard carrying, straight-running ballast, albeit the loss of Cronin denies Ireland one of their more dynamic carriers.

The pendulum having swung with Ireland’s 26-21 win to level the series in Melbourne, this time it is the Wallabies who will carry a residual feeling of anger with themselves into the fray.

It was not entirely surprising that they didn’t reproduce the emotional intensity and physicality of the first Test last week in Melbourne, but it will be no surprise if they do this time. Similarly, Bernard Foley and Kurtley Beale are likely to rediscover the accuracy of their kicking game to unleash the potency of Israel Folau in the air. Furthermore, their ability to pounce suddenly and from anywhere in attack remains constant. It’s why, despite having 40 per cent or less of the territory and possession in both Tests, the Wallabies have outscored Ireland by five tries to two.

And therein lies the rub. Ireland have made much heavier work of translating possession, territory and even clean line breaks and chances into the hard currency of tries.

In many respects, this is akin to a cup tie, even a cup final, something which Peter O’Mahony and most of his team-mates have been exposed to from underage club and schools rugby.

“I suppose cup rugby in itself means you’ve got to play the best rugby of your year. It’s the last game of the season for us and tomorrow’s a performance we’re going to have to live with for a long time.

“That’s familiar with a cup final. You don’t get a chance for a long time, some of us might never get another chance to put on an Irish jersey and I suppose that’s the beauty of international rugby. We’ll finish tomorrow and we have to live with it for however long it takes to get to back into it. So you’ve got to try and put in the best performance of your year.”

As O’Mahony also said yesterday, it is a measure of the task facing Ireland that they hadn’t beaten their hosts in Australia since 1979, and that emulating that team by winning a series here would be up there with a Grand Slam. It would also probably generate more respect in the southern hemisphere than that triumph too, while constituting a landmark achievement en route to next year’s World Cup.

The Wallabies will be highly charged. In their creative Waratahs trio of Foley and especially the inventive Beale and the athletic Folau – both of whom are due big games – they have an ability to strike from anywhere, anytime. But presuming they can go to the well one more time and scale the highs of last week, with perhaps also showing more of a clinical edge, the feeling lurks that this Ireland team are simply better at this point in time.