Devin Toner happy to draw attention to himself 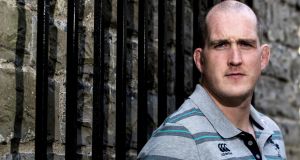 Devin Toner at Ireland’s base at Carton House, Co Kildare. “It’s hugely competitive. There are so many good secondrows out there.” Photograph: Inpho

Just as Joe prefers. But hackery will always unearth some obscure musings amidst broken down quotes. The well-worn drum beat to accompany the refereeing of Wayne Barnes got another thud, Jamie Heaslip’s invincibility elicited humility from the 99 capper while Devin Toner’s, albeit unlikely, leap towards Lions selection provided enough anecdotes to scatter malnourished wolves from this Georgian parkland retreat once inhabited by Earls of Kildare and Dukes of Leinster.

Schmidt, aloof and forthcoming in equal measure, provided his usual decent value before the heroes took flight for Cardiff, warming to a line of questioning about Barnes, who in 2015, whistled Ireland into a deep pit by allowing Leigh Halfpenny construct a 12-0 lead that, ultimately, denied this isolated little island a third ever Grand Slam.

“It’s nice to have one of the better referees,” offers Schmidt of the Englishman. “Last time there were frustrations because there were zero tolerance around falling on the wrong side of the tackle in the first 20 minutes. That ebbed away and I understand why because it would have been 13 aside by the end of the game if that tolerance was extended but unfortunately we copped the penalties against us.”

Schmidt retains similar concerns on Ireland’s return to the rebranded Principality Stadium as preceptions continue to vary about Jack McGrath’s status as a dominant scrummager.

“I haven’t had any conversations with Wayne,” says Schmidt. “We are always feeding things back. [In 2015] we were frustrated around the scrum and the last [game] against France.

“We play off more scrums than anyone else in the championship and it is incredibly infuriating when teams that don’t tend to play off scrums get rewarded for the way they approach the scrums.”

Next up – way, way up – Toner came down to sit among the little people. The lineout, Dev, is it getting better or do you feel the same?

“I know you see the stats and I throw a lot to myself. I know people are going to see that and are going mark me up. It is a lot about second guessing – will I throw it or will I not. It has evolved over the years . . . I won’t say it has got harder over the years. I’ve evolved as a player and a caller as well.”

Helps that Toner is the tallest man alive but Richie Gray, just four centimetres shy, soared beside him at Murrayfield. And yet, Toner’s statistics remain a wonder; just two lineouts from 12 were surrendered in Edinburgh, one from 10 in Rome while all 22 throws found an Irish hand against France (note: three overthrows were recovered).

Actually, Wyn Jones owns 114 caps – counting the Lions – and at 31 is a year older than our late-blooming-stretch who’s a finger tip shy of the half century. “It’s hugely competitive. There are so many good secondrows out there.”

Indeed there are. English terminators Maro Itoje and Joe Launchbury will tour New Zealand this summer, with Jonny Gray another firm bet alongside Wyn Jones, but Toner, above all else, guarantees possession. “It would be unbelievable for any player’s career,” says Dev, “but the Lions is an outcome of what happens here.”

Lastly, Jamie Heaslip, Irish rugby’s tech-guru, is sharpening studs for his hundredth battle – five on Lions duty which would have been six but for that less screamed about Warren Gatland selection of Toby Faletau for the third Test in 2013.

When making his debut against the Pacific Islanders in November 2006, the last swing from old Lansdowne rafters, did Heaslip ever envisage compiling such a durable body of work? “No.” He considers leaving it at that, but time brings wisdom so the 33-year-old shares some more: “Denis Leamy got 50 soon after that and I remember thinking that’s pretty awesome. Brian [O’Driscoll] said if you get 50 you are an established international. I have just been very lucky.”

Luck has little to do with it. Earls and Dukes, away they go.