Referee the only concern as Schmidt names expected team

‘I haven’t had any conversations with Wayne,’ Schmidt said on Wednesday

Ireland head coach names an unchanged team to face Wales in Cardiff, with Tommy Bowe replacing the injured Andrew Trimble on the bench. 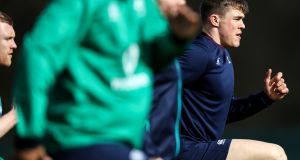 Garry Ringrose during an Irish training session at Carton House this week, he retains the number 13 jersey for Friday night’s trip to Cardiff. Photograph: Inpho

In Cardiff two years ago Wayne Barnes whistled Ireland off the pitch as Leigh Halfpenny kicked Wales into a 12-0 lead that, ultimately, proved the undoing of a Grand Slam.

With those decisions, and Barnes radically changing how he refereed the match after 20 minutes, one box on Joe Schmidt’s coaching bucket list remains unticked.

“It’s nice to have one of the better referees,” Schmidt noted. “Last time there were frustrations because there were zero tolerance around falling on the wrong side of the tackle in the first 20 minutes. That ebbed away and I understand why because it would have been 13 aside by the end of the game. That tolerance was extended but unfortunately we copped the penalties against us.”

Schmidt retains similar concerns ahead of Friday’s return to the rebranded Principality stadium.

“I haven’t had any conversations with Wayne,” said Schmidt. “We are always feeding things back. [In 2015]we were frustrated around the scrum and last time against France.

“We play off more scrums than anyone else in the championship and it is incredibly infuriating when teams that don’t tend to play off scrums get rewarded for the way they approach the scrums.”

Otherwise, it was a short, sharp, quiet week in Carton House. No surgery to either Wales or Ireland starting XVs as Tommy Bowe, the 33 year old Lions winger, “trained the house down” to keep Jared Payne and Andrew Conway off the bench for Friday night under lights in the Spaceship overlooking the Taff river.

“(Jared) was sharp this morning when he trained so that put him in the frame,” said Joe Schmidt. “But he just hadn’t had enough time with us.

“I think for his confidence he will potentially be involved with Ulster.

“That is potentially a springboard for him to have some involvement against England. ”

That can be interpreted as Schmidt firmly backing the growing international career of Garry Ringrose.

“Sometimes you are almost happy you don’t have to make calls. Robbie Henshaw and Garry have a really good relationship and are building on that. Sometimes that sways selection.

“I think Jared’s experience potentially even off the bench would have been handy as he plays fullback and he played on the wing in his long distance past.

“This has contributed hugely in the past but you got to keep your rhythm in this competition, got to keep improving, we got combinations that are improving.

“Some of Garry’s defensive work against the French was outstanding.

“His tackle on Guirado on the 22, when he closed the space so quickly and got such good contact. Those are the things we see as growth points by Garry.”

And that, for now, is enough to keep the man recruited from New Zealand to fill the void after Brian O’Driscoll retired.

What of the open or shut roof?

“There is no decision as yet. We are waiting for a formal request ot make a decision. The later that request come the better accuracy there is in the weather forecast. If it is fine there wouldn’t seem too much point in closing the stadium. You can get a build up moisture in the stadium that can actually be counterproductive for wanting it to be a dry surface, it can get slippery when the roof is closed.”

Finally, Jamie Heaslip will earn cap 100 (five for the Lions) on Friday night. When making his debut in November 2006, the last match ever played at the old Lansdowne road against the Pacific Islanders, did he ever envisage this sort of innings?

“No. Denis Leamy got 50 soon after that and I remember thinking that’s pretty awesome. Brian said if you get 50 you are an established international. I have just been very lucky.”

Leinster sign Crusaders tighthead prop Michael Alaalatoa 20:00
GAA to take keen interest in Leinster trial to get spectators back at the RDS 19:48
Thomas Tuchel tells Chelsea to focus on the present and seal progress against Porto 19:34
Rachael Blackmore admits to sleepless night as she relived Aintree heroics 18:37
Matsuyama’s crowning glory at Augusta always seemed his destiny 18:30
Crossword Get access to over 6,000 interactive crosswords