Gerry Thornley and Gavin Cummiskey look ahead to Ireland v Wales, where referee Wayne Barnes could potentially have a big say in proceedings. Video: David Dunne 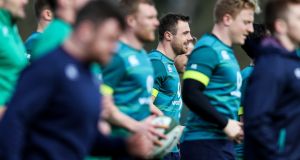 Tommy Bowe at an Ireland squad session at Carton House, Co Kildare. Coach Joe Schmidt outlined his reasons why he recalled the Ulster winger to the bench ahead of Craig Gilroy. Photograph: Inpho

Joe Schmidt regularly makes reference to the value of having a relatively injury free, settled side in the Six Nations. He did so again yesterday, and the stats back him up. In naming an unchanged side for the first time since round three in his first, title-winning campaign of 2014, Ireland will have used only 19 players in their starting line-up, and 28 in their match-day squads, after four rounds.

Schmidt, as forecast, has made only one enforced change to his match-day 23 by recalling Tommy Bowe to the bench in place of the injured Andrew Trimble in naming an unchanged starting XV for the first time in the Six Nations since round three in 2014.

It can’t be often that a player who is omitted from a match-day squad after an undistinguished cameo off the bench, as was the case with Bowe in Murrayfield, is then recalled ahead of a player, Gilroy, who scored a hat-trick in his last offering from the bench in Rome.

In this Schmidt cited how Bowe has “trained the house down” and his knowledge of one-time former Ospreys team-mates. It was put to him that former Irish right-winger Shane Horgan has described Bowe’s selection against Scotland as a “nostalgia call”.

“Shane hasn’t spent any time in our environment, so he’s never seen Tommy train, so I think it’s a typically external opinion that is purely opinion based. We try to base our decision on how a player is performing.

“I’ve coached Shane and there’s probably been times when people have questioned my selecting him in the past,” added Schmidt with a smile. “There’s always going to be people questioning selection. I feel that we’re best placed. There’s no way I’d say we get it right every time, because there’s a human factor in coaching, just as there is in playing, as I referred to earlier with George North. I think he’s a super player, and if somebody has a slightly off day, there’s no guarantee that off days continues, in fact it’s potentially going to be the reverse, they’re going to revert to type and be outstanding in their next performance.

“I’m not sure whether, over the last three and a half, four years, how many nostalgic decisions I’ve made. But I can’t really remember many.”

But Schmidt cited Bowe’s last two performances for Ulster – he was particularly impressive in an all-action try-scoring display against Glasgow three weeks ago – as evidence that the 33-year-old can recapture the glories of old.

“I think if you look at his last two Ulster performances, you can see his ability to read the game, to run a good line, to be in the right place at the right time, his aerial game, is a real strength for him, and for us, that’s where they came after us last time with Dan Biggar; and Liam Williams and George North are such big men, Leigh Halfpenny got a couple of good aerial takes early in the game.

“Therefore, you cut your cloth, you account for how somebody’s training, you calculate what they bring to the game, and then you make decisions. That’s where I’d challenge anyone to do as much work looking at how people are preparing themselves, and then make decisions. The caveat of all that, is I’m not claiming that we’ve got it right, we’ve just worked hard to try to make the best decisions.”

Discussing the notion of attacking North, based on his defensively off-colour display against Scotland, Schmidt clearly subscribes to the theory that lightning is unlikely to strike twice in a response which also highlights the unpredictability of sport.

“So I think he will have a big one unfortunately. And I’m sure he’s highly motivated to have a really good game, as are the rest of the Welsh XV.”

Noting the chances they let slip against England and Scotland, Schmidt described Wales as “very dogmatic, they’re very hard to beat back and beat down, they’ll always come back at you.” He added that they are “playing with a little more freedom” while retaining traditional virtues.

“They keep that ball and they keep the pressure on because they are very much a gain line team, and it’s very hard to stop them getting that gain line when the big runners get involved.”