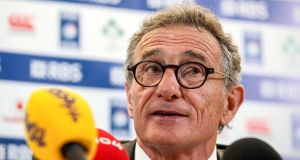 Guy Noves has made four changes to his France side for their Six Nations clash with Italy. Photograph: Inpho/Dan Sheridan

Fullback Brice Dulin will start for France against Italy in the Six Nations as manager Guy Noves makes four changes to his team for Saturday’s game at the Stadio Olimpico.

Dulin replaces Scott Spedding, who was disappointing in Les Bleus’ 19-9 defeat in Ireland in their previous match.

Blindside flanker Fabien Sanconnie, 22, will make his first start, with Noves hoping that “he will give everything in terms of fighting.”

“He is tall, he will be very important in the lineouts,” he added.

Virimi Vakatawa is back in the wing in place of utility back Yoann Huget, who will start on the bench.

Second rower Julien Le Devedec will start instead of Sebastien Vahaamahina, who has been ruled out with a back injury.

“Maybe he will be able to play the next game against Wales,” said Noves.

Flyhalf Francois Trinh-Duc is on the bench, making his comeback after a three-month injury layoff.