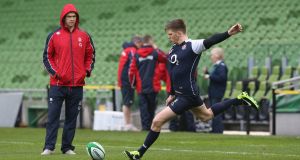 Blessed is the son who gets reared in his father’s shadow. Raised with small pleasures, like those evenings when the first man you ever know stays on long after food is devoured to talk about what he loves doing most.

And you, in turn, learn to love it just the same.

“They have been talking about rugby since [Owen] was big enough to sit at the table,” said England head coach Eddie Jones on Monday. “They are both mature enough to get on with it. They don’t need any more motivation to do well this week.

“They are Farrells. I think that sums it up.”

This is the first time Owen Farrell goes up against a team coached by his father Andy Farrell. There is only 16 years between them but a sporting lifetime which Owen is slowly but surely beginning to fill.

Andy Farrell is one of the greatest rugby league players, making the first of 370 Wigan appearances the same year Owen was born and being selected by Great Britain to play in the Ashes at the age of 18. That was the beginning of a legendary career before he switched codes to join Saracens in 2004.

Owen Farrell, the young wolf, switched along with him, taking up union at 13 due to his father’s journey south. A Lions tourist at 21, understudying for Johnny Sexton, on Saturday he’s expected to clock up 600 Test points.

He is a Farrell who, seemingly, tackles like the old man: “Farrell is deceptively strong,” wrote Gordon D’Arcy. “I know from experience. In 2014, when they beat us 13-10 at Twickenham, I remembered being hit by Farrell. I’ve been hit by plenty of centres down through the years but he stands out in Test rugby. His timing in the tackle is usually spot on and he’s hard.”

England marched over Scotland last Saturday to a world record equalling 18 straight victories due to the multiple weapons at Jones’s disposal. There’s the South Sea islands power reserve in the Vunipola brothers and Nathan Hughes, and there are other rugby league influences like Mike Ford’s son George and Ben Te’o.

But, nowadays, Farrell is the probably their most valuable commodity.

Both father and son would have been quietly devastated that their time working alongside each other – up to the last World Cup – ended in failure.

But the recovery has been completed by what England have achieved since. And Ireland wasted no time signing Andy Farrell. Warren Gatland has also doubled down on his defence coach from the successful 2013 Lions tour of Australia.

Owen Farrell has played inside centre for 16 of those 18 games and once at outhalf, on the summer tour of Australia, when he walked off the field with 24 points. That tally was equalled two weeks later to secure a 3-0 series win but last Saturday at Twickenham he finally surpassed the mark with 26 points despite being a genuine concern after sustaining a dead leg on the Thursday.

It meant he couldn’t do the usual kicking practice with Jonny Wilkinson (England points total: 1179).

“I did some visualising stuff, sometimes that’s better than practising.”

He is, unmistakeably, a northerner. That means bullshit or any form of weakness carries no water.

His character is hilariously evident from a constant stream of social media posts by James Haskell, his hulking team-mate, and David Brent impersonator, which tells us that journalists are the only part of life as a professional rugby player he could do without.

“I wouldn’t say I am coming up against him,” Owen said when Andy was mentioned. “I don’t think he is playing, is he? I don’t think that comes into it.”

Of course it does. A family subplot is unavoidable when the father is charged with shutting down his playmaking son.

“I guess we’ll see. Ireland are a good team. I’m sure it will be a tough challenge. We’ll get excited about it.”

The straight bat was never going to call off the hounds.

“It’s not like he is playing in the game. There is only one of us playing in it. He has a coaching role.

“I guess the only person it will affect is me mum. Not us.

“No,” he said, realising the scent will only increase. “She just wants everyone to do well.”

So she’s aiming for a draw?

The reporters have their tails up now.

Will you speak to dad this week?

But you would do normally?

“Speak to my dad! Probably, yeah.”

But you would not deliberately not speak to him?

“I haven’t thought about it. You are going into things that have not even entered my head.”

Since your dad has been over in Ireland do you speak to him every day?

“Not every day. We speak to each other what I would call the normal amount. We talk a fair bit. Just normal, as any family would.”

Has the conversation changed since he has been coaching Ireland?

“We chat about rugby. I don’t know if you are trying to say I’m giving him any insight or he’s giving me any insight. We chat, general chat as families would.”

As Farrell’s would, since he was big enough to sit at the table.